I am a Brisbane-based professional historian with extensive experience in presenting History to the public. This work has included guided tours, exhibitions, books and articles, public talks, newspaper columns, and organising community heritage maintenance projects.

This site contains information about my services, and blog posts about all manner of historical curiosities such as hangings, bunyips, prisons, colonial Queensland, cemeteries, shark attacks, and ghosts. 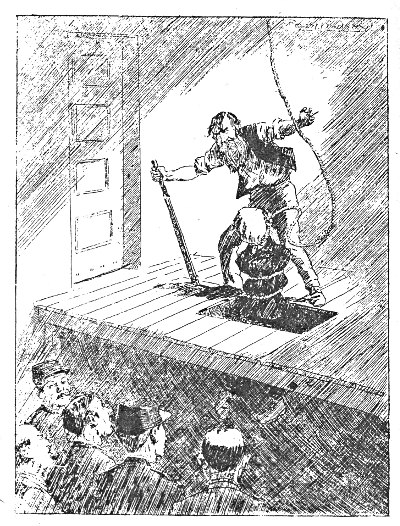 The Courier-Mail ran an article back in July about the condition of graves in Toowong Cemetery. The story outlined damage in this heritage-listed site, including intrusive tree roots, weeds, collapsing grave surrounds and fallen headstones. It also promoted demands that the Brisbane City Council should pay to fix up broken graves (there are over 120,000 graves in the cemetery). There aspects of the article I agree with, and others which are problematic.
I help organise Queensland Cemetery History Tours over at Toowong once a month, as well as conducting research over there, so I am aware of the state of the place. These problems are also familiar to me as a member of the Friends of South Brisbane Cemetery (FOSBC) - check out this gallery of headstone damage at South Brisbane - and they are no doubt recognisable in varying degrees to the volunteers over at Balmoral and other historical cemeteries around Brisbane. These issues are not unique to Toowong.

Darcy Maddock, the president of the Friends of Toowong Cemetery, is quoted in the article as saying that the BCC does a generally good job with cemeteries but that tree damage needs to assessed. This is absolutely correct. There are issues, however, when the owner of the ‘Ghost Tours’ small business (Cameron 'Jack' Sim) demands that ‘the council needs an emergency fund to rapidly repair broken sites.’
The article acknowledges that the extent of damage at Toowong is estimated to be ‘multi-millions of dollars’. Where would this money come from? BCC already allocates $12,000,000 of ratepayers’ money to maintaining the 12 cemeteries under its control. Toowong has received the lion’s share of funding for historical cemeteries over recent decades, with vastly superior facilities and landscaping compared to other old cemeteries such as Balmoral and South Brisbane. If more money were to be spent on Toowong, where would it come from? Increasing rates or cutting council services elsewhere? Less money for other cemeteries?
It is worth noting here that someone (hiding behind the cloak of anonymity) attempted to get our monthly Thursday night history tour at Toowong stopped earlier this year, with one part of the argument being that revenue from tours there should not go outside the electorate. My counterargument was that Toowong Cemetery is funded by ALL Brisbane ratepayers, not just the local electorate. This new demand for extra spending at Toowong only proves my point. The cemetery belongs to the whole of the city.
It is also important to remember that the graves legally belong to individual families, and it is their responsibility to fix them if the grave is in disrepair. At the same time, the BCC needs to do more to monitor new and existing tree growth in order to limit damage.
The members of the FOSBC understand that the cemetery decay can be managed but not stopped. We can, however, extend the life of the heritage fabric, and raise awareness of what needs to be done into the future, and we do get a lot of work done through proactive, award-winning community programmes such as the Guardian Angels cleaning bees. The volunteers remove tree debris and weeds from graves and pathways, wash headstones, clear drains, move loose stone slabs, remove weed-tree saplings, record existing monument damage and notify families where possible, remove broken branches, notify BCC of dead or diseased trees, and are recording the cemetery flora. This is funded by our hard work presenting guided tours there.
I understand that the Friends of Toowong Cemetery might not be in a position to do this kind of work right now (the article describes them as ‘a volunteer group of four elderly people’, which no doubt underestimates their size) but there is an opportunity for more community activism in building up group numbers.
A second issue with the article, aside from funding demands, is that Mr Sim claims that Toowong Cemetery should be ‘one of the great tourist destinations of our city’. Cemetery tourism is fine within limits, and if done respectfully, but the primary function of Toowong is still as a functioning cemetery - a place of love, rest and remembrance. I’m not sure that the kind of ‘tourism’ Mr Sim has in mind is compatible with that function.
Mr Sim also claims that ‘people have to know about this history or we will lose it’. Frankly, it is absolutely hypocritical of him to say this. He has done his level best to stop OTHER people presenting history tours if he feels they will ‘compete’ with his small business. The FOSBC is just one group that have been on the receiving end of this behaviour from him over many years. Mr Sim has taken advantage of the BCC tour license system to lock in most Friday and Saturday nights for himself at Toowong and South Brisbane - even though he doesn’t use them all - and thereby blocking other people from presenting any cemetery events on those nights. The chart below shows the current roadblock to 'letting people know about this history'. 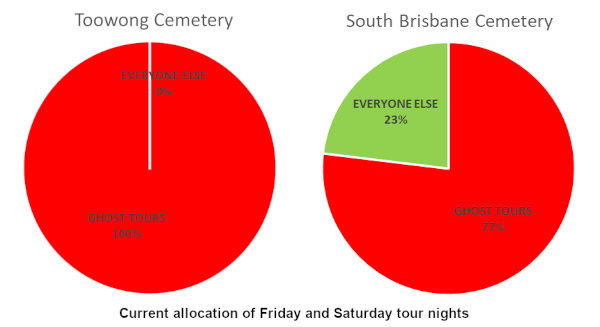 So when he says he wants more tourists in cemeteries, he means just for his own business - at $45 per person - while asking that ratepayers cough up more to look after them. I won’t go into my opinion of the standard of ‘history’ that Mr Sim presents, although I have been told that he recently claimed on television to have seen a statue move in the cemetery.
The FOSBC believes that increasing public engagement with historical cemeteries should be built around community-led, not-for-profit history and arts activities that are respectful, and not turning these special places into novelty haunted houses in the name of private profit.
So yes, there is a problem with heritage decay in old cemeteries, but this exists right across Brisbane (and any other historical cemetery in the world). Rather than spending ‘multi-millions’ at one cemetery, an approach is needed that treats all our cemeteries equally, with proportionally fair funding for all. It also requires building increased community engagement. The kind of community-led approach we have taken at South Brisbane has its limitations, but we are trying our best to do what we can to resolve some of these issues.
No comments: