My Night Alone in a Boggo Road Cellblock 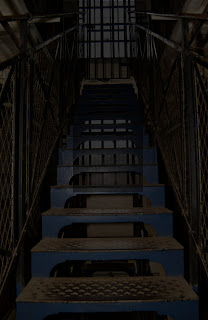 I once spent a night alone in a Boggo Road cellblock. In fact the entire prison was empty apart from me. The 'lights out, gates locked, 3:15 a.m.' kind of empty. As far as I know, I'm the only person to have ever done this.

The answer to the first question that always comes after I mention my little sleepover is 'no, I didn't see a ghost'. There again, while there won't be some Edgar Allen Poe-ian narrative here, it actually turned out to be an interesting test of the limits of my skepticality.

It was October 2003 and the Boggo Road Gaol Historical Society had organised a special Centenary Day to commemorate the passing of 100 years since No.2 Division opened as a women's prison in October 1903. To mark the event I had designed my first big museum exhibition, '100 Not Out: A century of escapes from Boggo Road', which used escape tools from the museum collection to tell the story of escapes from the prison. This exhibition took up the whole ground floor of D-Wing, including the cells, and took months of planning and construction by the museum volunteers. Being the first project of its kind that we had attempted, it turned out to be a great learning experience as there were a number of hiccups along the way. In fact, come the evening before the Centenary Day it was still not quite finished, so I volunteered to stay back until it was all in place. Darkness fell, and after turning out all the lights except for our office and D Wing, the other volunteers left, locking the big prison gates behind them, and I was alone.

I anticipated the work would take a few hours to finish, but after a few hours of glueing industrial felt onto backboards, laminating text boards and applying the finishing touches to various display cabinets, it was clear I would have to stay much later. Maybe even right through the night. All by myself in a Boggo Road cellblock. Which shouldn't be a problem as I don't believe in ghosts. I've never seen or heard anything in my life that couldn't be explained in a rational manner.

Even so, as the night wore on and I got into the wee small hours working away alone in that cellblock, it felt rather spooky, but only because I let myself start thinking about scenes from movies like the 'Sixth Sense', the original 'Woman in Black', and the original 'House on Haunted Hill'. I also remembered some paranormal investigation report I once read about the prison, reporting some 'dark energy' they had 'sensed' on the top floor of D Wing. If I turned around suddenly, would there be some horrible thing standing there staring at me? Would there be a dark shape on the top landing, watching over me? A little girl sat on the steps? A man hanging from unseen gallows? After walking over the grass circle outside, would there be faces watching from the upstairs cellblock windows? Of course not, but it's much easier to imagine such things in a setting like that than in a supermarket at lunchtime. It's an inherent quality of old deserted buildings, especially at night, that we are culturally conditioned to fill the blanks in the familiar scene with stock characters. 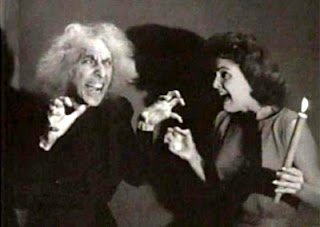 And so it was that at one point during that night, around 3 a.m., I found it increasingly hard to focus on the work at hand because of the niggling feeling that I was being watched (in my defence, this was after about 18 straight hours of work). The cellblock felt colder and colder and quieter and quieter, except for the light classical music playing on my radio. I managed to half-convince myself that somebody was on the top floor walkway, looking down at me. Once or twice I looked up suddenly, to settle my suspicions one way or the other, but saw nothing in the darkness up there. In the end I walked quickly over to the powerboard and switched on every light in the cellblock, on all three floors. Then I switched stations, from classical music to bogan rock and turned up the volume. Maybe enough to deter any ghosts, or at least mask any sounds they might make so I wouldn't hear. I soon managed to refocus on the work and it didn't take long for my rational mind to take over again, especially as dawn and the deadline loomed.

Imagination can have a powerful effect on emotions. Some people get easily frightened and tense on our nocturnal cemetery tours because their minds are running through spooky scenarios. While some see a darkly quiet scattering of headstones and trees, peaceful under the moonlight, others imagine a bustling supernatural landscape of shadows among the graves, the woman in black staring back at them, and lost souls wandering the pathways. Manipulating the imaginations of particularly gullible people to make them tense is what some ghost tours attempt to do, even if it means telling lies to get there ("someone saw a ghost right here during last week's tour"). In my experience, people in this induced state of mind are too quick to slap the 'supernatural' label on anything slightly out of the ordinary.

When I finally put the finishing touches to the exhibition, the sun was rising in the sky, admittedly to my relief. The front gates opened again and the first volunteers entered to set up the museum for the soon-to-be-arriving public. I said goodbye and headed home for a few hours sleep.

And there it was. As far as I know, I'm the only person to ever spend the night completely alone in Boggo Road prison. I saw nothing (not that I looked too hard), heard nothing, and I didn't get paid $10,000 by Vincent Price for surviving the night alone in a haunted house. However, I did learn that even a skeptical mind can play tricks on itself when placed in a stereotypically 'spooky' situation, and some of us are not as always as rational as we like to think we are.