‘Brisbane has been voted the 2nd most haunted city in the world by National Geographic magazine.’ 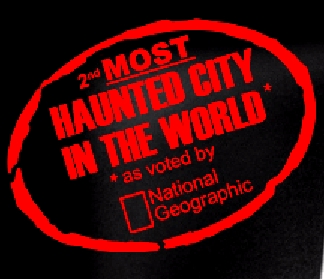 Or so the marketing for a Brisbane ‘ghost tour’ claims. It is, on the face of it, a surprising assertion. Brisbane is a largely modern city that has been home to European arrivals for less than 200 years. Its history has been generally quiet compared to thousands of other cities and towns around the world. Hypothetically assuming that ghosts even exist, why would Brisbane be more haunted than London, Paris, Berlin or Rome, with their millennia of bloody history? What about places that witnessed scenes of incredible wartime carnage, such as Hiroshima, Nagasaki, Dresden, Volgograd, Warsaw, Manila, Gettysburg, Gallipoli, the Somme, Baghdad, Nanking, and others too numerous to list here?

And if anybody wanted to promote Brisbane as such a hotbed of paranormal activity… where was the proof?

This question began to be asked of small business owner Cameron ‘Jack’ Sim after he put the claim on his 'Ghost Tours' website several years ago (and is still there today, complete with an unauthorised National Geographic logo). Unfortunately it is a question that Ghost Tours were unable to answer.

Timeline of the claim

Sim started making unproven assertions about how 'haunted' Brisbane was back when he started his ghost business back in 1999, saying that the city was the 'most haunted in Australia'. The statistics would of course be impossible to verify. Then in 2000 an unreliable publication called The International Directory of Haunted Places (from an author who had previously written on sea monsters and UFOs) listed 14 'potentially' haunted places in the city... from a list provided by Sim himself.

Shortly afterwards it was reported in the local Sunday Mail that 'Brisbane had been voted the most haunted place in the southern hemisphere by international ghost hunters'. Once again the source for this information was Sim.

Already a clear pattern was emerging as he upscaled his claims without providing any supporting evidence: The claim is made - Somebody unquestioningly repeats it - That repetition is presented as confirmation of the original claim.

Around this time a backyard operation calling themselves ‘Ghost Research Foundation International’ started producing online 'most haunted' lists. In 2002 they wrote that York, England, was the ‘most haunted city in the world’ with Brisbane in third place behind Los Angeles. The numbers jumped around randomly in similar reports over the next few years, and in early 2009 the Courier-Mail recycled this dubious information in reporting that Brisbane was considered ‘one of the most haunted cities in the world’... by the International Directory of Haunted Places.

It was later that year that the story took the next step when it was claimed on the 'Ghost Tours' website that National Geographic had 'voted' Brisbane as the 'second most haunted city in the world'.

And that's when the questions started. When the ‘most-haunted’ claim was repeated on a TV show back in 2010, the producers of the show were unable to find any evidence to back the claim up, and jokingly wrote that ‘In the meantime we'll take his word for it, like we took that Charlie Chaplin time traveller video dude’s’. In other words, they weren’t taking it seriously.

In 2011, curious commenters on the ‘Ghost Tours’ Facebook page started asking to see a copy of the increasingly mysterious poll. Things started to quickly unravel as Sim backpedalled away from his original claim. Important details of the story suddenly changed, so instead of National Geographic voting Brisbane to be the second most haunted city in the world, Sim now claimed that magazine writers had merely been told it was so... by an unnamed ‘paranormal society’.

It was now embarrassingly clear that there was no poll.

A few months later it emerged that the previously-unnamed ‘paranormal society’ in question was none other than 'Ghost Tours', who now confessed that they had ‘happily supplied information to NG’. Once again we see the same pattern: The claim is made - Somebody unquestioningly repeats it - That repetition is presented as confirmation of the original claim. Only this time the process was twisted to appear as though a ‘vote’ had taken place.

Despite repeated promises on social media to supply a scanned copy of the article, none was produced. Ghost Tours couldn’t even provide the name of the magazine in which it appeared. It was left to the National Geographic themselves to officially inform Liam Baker of Haunts of Brisbane - who did a lot of the legwork on this investigation - that they have never rated haunted cities, although the October 2008 issue of a magazine called Traveler (part of the National Geographic stable) did feature an article about the paranormal industry in York, England. At the end of that article the writer briefly listed some other supposedly haunted places, including New Orleans, Prague and St Petersburg. The last sentence reads:


‘Then there is Brisbane, Australia, ranked after York by the Ghost Research Foundation International, with more than 240 sightings...’

That is the only mention that any National Geographic publication has ever made of ghosts and Brisbane. The writer had merely referred to the dubious 'second most haunted' claim made years earlier by 'Ghost Research Foundation International', which in itself had been based on information provided by 'Ghost Tours'.

This was the point where the simple manipulation of baseless statistics turned into outright fabrication. A lazy reference by some freelance writer in a spin-off magazine suddenly became ‘As voted by National Geographic’.

‘Lie’ is a strong word to use, but there is no other explanation for what happened. National Geographic did NOT vote Brisbane ‘the second most haunted city in the world'. Yet it must have been a very deliberate act to concoct that sentence, turn it into an image and place it on a website.

Why was it done?

This is plainly a marketing ploy. A place needs to be perceived as being ‘haunted’ before anybody in the paranormal industry can try and profit from it (an imperative that has resulted in low standards of ‘proof’ for stories). Brisbane is a young city and would need a bit of ‘fluffing up’, ghost-wise.

The big question here is why would someone persist with the 'most haunted' claim long after it had been exposed as false? Why not simply pass it off as a mistake and change the wording to ‘described by National Geographic as…’? Labelling Brisbane as a particularly haunted place would still be bogus, but at least the most blatant aspect of the lie would be removed from public view.

Once again, there is a pattern.

Other websites such as ‘Hellhound’s Howl’ and ‘The Haunts of Brisbane’, and the Skeptical Enquirer magazine, have raised many questions about the claims and stories put forward by Brisbane 'Ghost Tours'. I have looked at a few cases myself, such as the evolution of the ‘Lady in Black’ tour story at South Brisbane Cemetery, and the story of an accident at a major printing press. To put it diplomatically, some of the content of these tours is ‘open to question’.

And yet the use of the 'most haunted' marketing slogan continues. Unfortunately, there is a measure of arrogance at play here, a sense of ‘I don’t care if you think I’m lying, because some people still believe me and so I’ll continue to do it’. Or, as George W. Bush once joked, ‘You can fool some of the people all of the time, and those are the ones you want to concentrate on’.

There has been much written about various assertions made by ghost tours over the years, but the persistent peddling of the 'most haunted' claim is perhaps the most damaging. It is an arrogant own goal that does not reflect well on the integrity of those responsible.

(For a more forensic examination of the 'most haunted' story, see these 'Haunts of Brisbane' articles.)