The murder of Bronia Armstrong in Brisbane in 1947 turned into a double tragedy when Reginald Brown hanged himself in Boggo Road’s F Wing just a few days after being found guilty of the crime. The authors of the new book Lingering Doubts (Deb Drummond and Janice Teunis) took another look at the case and discovered serious discrepancies that suggest there are - as the title suggests - lingering doubts about the verdict.

I recently interviewed Deb Drummond about the new book:

Congratulations on Lingering Doubts. What prompted you and Janice to research and write this book?


It began so simply - curiosity. Although, if I had any inkling about the enormity of what I was setting in motion, I may have walked away from the State Library and had a coffee instead of leaving with a bundle of newsprint.

My scrap book grew until Bob Bottom, respected investigative journalist, read the material. Bob went so far as to suggest a title for the story, which he said should be told, not only for the sake of our family but also in the public interest.

My cousin, Janice, was equally disturbed by glaring anomalies and, at her prompting, our partnership was formed. We began the long and arduous research that produced this book. In fact each injustice uncovered, made not writing Lingering Doubts, no longer an option.

The short answer: we wanted to give our grandfather the voice he was denied from the moment Brisbane detectives targeted him.

Could you outline the types of injustices and anomalies you came across?

Where do we start?

Boggo Road Gaol authorities confiscated the notes Reg Brown attempted to hand his solicitor. A known criminal was ‘discovered’ by police as a witness. A physical health problem our grandfather suffered from was concealed. And so it goes on...

In the book, you have acknowledged varying forms of assistance from dozens of people over the last seven years. The story has obviously been extensively researched - do you feel that the research is now complete?

We are surprised at the interest Reg Brown’s story has generated and grateful for the support we have received and continue to receive (yourself included). Over the years the Queensland Police Service has readily allowed us access to files and material, without which, the task of advocating for our grandfather would have been impossible. We’d like to think we’ve exhausted all avenues but hope our book might prove to be a springboard, so to speak, and more information may surface. To help with this endeavour, one of our supporters and family friend, Emma Starr, has designed our website. Our dream is that one day a, perhaps retired, legal professional will read Lingering Doubts and feel inclined to continue where we left off.

How much has this research changed your own perception of your grandfather? What effect has it had for your wider family?

When we started this journey, we (and our sisters and cousins) had no perception of our grandfather at all as he was missing from our childhood and our parents did not speak of him until we were adults – and then only to reluctantly disclose scant details about his arrest and imprisonment. My Dad, and Janice’s Mum, are well into their eighties now and retain wonderful memories of their father, Reg Brown. It’s taken enormous courage on their part to come forward and offer their contributions to Lingering Doubts. Although release from their crippling secret is liberating to a degree, they have had to relive the horror that shattered their family. The good thing is they now know much more than they ever knew.

Positive perceptions of our grandfather have consolidated as we began to meet him vicariously through archived material and personal memories of those who really knew him. We regret this loving family man was not in our lives.

This whole story is obviously within living memory for some of your family. How does the wider family feel about that story being used commercially in an unsympathetic manner?

Two of Reginald Brown’s children, teenagers at the time of the murder, are now in their 80s and have borne the stigma of their father’s ‘crime’ all their lives. By very careful analysis of all relevant details available to us via archived police files, trial transcripts and our interviews with people who were involved at the time, we believe we have made a credible argument for our grandfather’s innocence, and displayed the deviousness of police and the Crown prosecutor.

Our book needs to be read in comparison with other available works on this crime. The family thinks anyone peddling this very sad story needs to understand there is compelling evidence to suggest the tale being promulgated is a fabrication of cobbled half-truths. 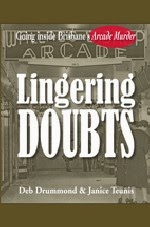 Where can people get the book from?

Books are available at our talks, details of which are on our website. They can also be purchased on and at Copyright Publishing, and at The Book Bank (Top Floor, Toowong Village, Toowong).