'Haunting Australia' (...and Also Your Wallet)

Having previously watched 10 minutes of the TV show 'Haunting: Australia', I swore I’d never waste that time again, but then my youngest son and I watched Penn and Teller’s Bullshit: Ghost Hunting, an hilarious but vicious takedown of ghost hunters, so we thought we’d take another look at H:A for a laugh. And laugh we did.


This particular episode was set in the ‘Australiana Pioneer Village’ in Wilberforce, New South Wales, which houses a collection of old timber structures shipped in from around New South Wales and set up in a field. These buildings were only marginally more wooden that the acting of the H:A team members. It was the usual colour-by-numbers ‘team’ with a ‘lead investigator’, two ‘celebrity psychics’, and three other people who seemed to be filling the usual perfunctory roles such as ‘camera guy’, ‘tech guy’, etc. The team seemed too large and some of the members looked a bit uncomfortable, like they didn’t really have anything to do. They also didn't seem to know each other, and there was a palpable lack of chemistry and awkwardness in their interactions.

From the start it was obvious that this farce was going nowhere. They used the standard ‘GhosthunterVision’ method of filming people walking around rooms, which involves night vision cameras and the person trying to create a sense of tension by constantly declaring that they can ‘feel’ something, or ‘sense’ the presence of someone. Since ‘feelings’ can’t be recorded or measured, the success of all this is wholly reliant upon the audience actually believing what the presenter is telling them. I didn’t, and neither did my primary-school-aged son.

What we did see was just people walking around empty rooms talking the regulation spook-babble, trying to create an impression that something was happening when it clearly wasn’t. There is undoubtedly a commercial pressure to film some kind of a positive result, because nobody would watch a show about people walking around rooms saying ‘nope, nothing here’. The alarm bells were ringing loud because they managed to sense supernatural activity in just about every single building they walked in. 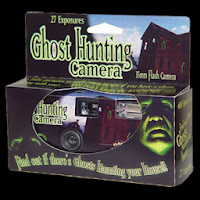 If the psychics came across as dodgy, the ‘science’ was deplorable, as generally seems to be the case in these paranormal investigations. In one building they set up what appeared to be a disco ball projecting lasers through the smoke of a dry ice machine. There was some nonsense spoken about ghosts having ‘an amount of mass’, which would manifest itself in the smoke/laser combo. Of course nothing happened, although we were assured that a nearby ghost-o-meter registered over '6', but we just had to take their word for it because it wasn’t actually filmed.

This section of the show summed it all up really. We have a person claiming that 'ghosts' have a 'mass' without any explanation or exposition of what he is talking about. What is his theory or evidence to back this statement up? There was, of course, none, yet he proceeded as though this was an accepted fact, and then cobbled together the kind of 'invention' a primary-school child would doodle up. And hey presto, nothing happened.

A big focus of the show was the alleged movement of a curtain in an upstairs window. At least, we were told it moved. There was much finger pointing and excited yelling from the team, cameras zoomed in, and we were absolutely assured that it was moving. Except it wasn’t. I rewound the scene three times and we looked for movement but it just wasn’t there. The team didn't set a camera up for the window in case it happened again.

Then there was the scene where the female psychic was upstairs by herself when her camera suddenly stopped working, just before she heard a sound. And she ran out of the house. Why would a psychic who claims to have spent the night sensing and seeing ghosts suddenly run away when she hears a small noise (which nobody else heard)?

Then there was a bizarro-world breakaway scene with the team visiting TV’s ‘Summer Bay’ and having a painfully lame ‘Aussie BBQ’ where they robotically discussed how they liked their steak cooked and (I kid you not) ‘throwing a shrimp on the barbie’. Then the male psychic went for a dip in the surf and informed us that salt water is good for washing off paranormal/psychic activity. Apparently sea water washes ghosts off you.

At the end of the show came the recap of the alleged ‘evidence’. There was a recording of a random background ‘bleaargh’ noise (outside), played back with the usual trick of first telling you what you are hearing - not once but three times, in the hope that the power of suggestion is enough to make you think ‘bleaargh’ sounds exactly like ‘get off’.

Then the feedback on the laser disco experiment brought awesome evidence of something moving in the smoke. They excitedly showed it three times with a bright red arrow pointing to it. The problem, was, nothing was happening. We watched this bit twice and saw zilch. Perhaps this was another attempt at using the power of suggestion to persuade viewers that they could see something.

So that was it. Lots of ‘feelings’, a ghost in almost every building, a curtain that never moved, a random background noise outside, non-movement in the ghost-detecting disco, a ghost hunter who runs away when she hears a noise, and sea water washes off ghosts. The narration was also rather annoying. In other words, absolutely nothing whatsoever happened but they dressed the final cut of the film up in formulaic GhosthunterVision and there’s a show for you.

I found it to be a cheap act of illusion and play-acting, something like an amateur magician’s show. The team seemed awkward and unconvincing, and produced nothing I couldn’t reproduce on film with my youngest son and a night vision camera. At least the show was shown on the right channel. Science Fiction.

Unfortunately, if this show did achieve anything, it was degrading the historical value of the Australiana Pioneer Village. We really need to stop places of historical interest being turned into fake 'haunted houses'.