The Seven Devils of George Street

'Now when Jesus was risen early the first day of the week, he appeared first to Mary Magdalene, out of whom he had cast seven devils.' (Mark 16:9) 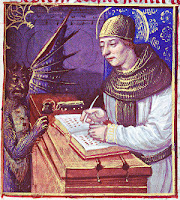 Anyone familiar with Brisbane's George Street will probably have noticed the bizarre carved relief of a devil's head over the main entrance of the old Government Printing Office. If you are not familiar with it, stop and take a look the next time you are around there.

Then, if you step back a bit, look up to the top of the building and you will see two hooven gargoyles with the same face, perched on the parapet looking out over the street. The trees make viewing a bit tricky, but you might also be able to see four other carved devil faces on the pilasters on the wall below the gargoyles (see photo below).

This means that back in 1911-12, the Queensland Government erected a government building with seven sandstone devils on the front. Why would they have done this? The answer is not as sinister as some might think. Simply enough, the devil is a historical symbol of the printing industry.

As far as I know, these are the only 'printer's devils' in Australia, although I would be happy to be corrected on this matter.


Why the 'Printers Devil'?

There are several different theories, some more plausible than others, as to where this concept came from.

A 'printer's devil' was a nickname given to printer's apprentices, who performed such tasks as mixing ink and fetching type. These apprentices invariably stained themselves with black ink and - as black was associated with the 'black arts' - the nickname 'devil' took hold.

There was also said to be a 'fanciful' belief among printers that print shops were haunted by a special devil who got up to such mischief as inverting type, removing entire lines of completed type, or misspelling words. Historically this figure was Titivillus, a mythical demon that worked on behalf of Satan to introduce errors into the works of scribes. References to Titivillus date back 800 years. It has been suggested that the apprentice became a substitute scapegoat for printery mishaps, leading to the 'devil' nickname.

Another rather implausible account of the origins of the name has John Fust - a business partner of Johannes Gutenberg - selling several of Gutenberg's bibles to King Louis XI of France, claiming that the bibles were hand-copied manuscripts. As the individual letters were identical in appearance, Fust was soon accused of witchcraft and imprisoned. Although he was later freed, many still believed Fust was in league with Satan.


A further association with the devil in printing is the name of the hellbox, which was a box that worn and broken lead type was thrown into, and which the printer's devil (apprentice) then took to the furnace for melting and recasting.

Yet another link was 'Deville', the assistant of the the first English printer and book publisher, William Caxton. This was said to have evolved to 'devil' over time and used to describe other printers' apprentices.

All in all there are a number of possible explanations for the concept of the printer's devil, but the link between the ancient Titvullus stories and the ink-stained apprentices seems the most plausible.

There is, however, one other story I came across during research for this article. It comes from an uncomplimentary review of a Brisbane 'Ghost Tour' that stops outside the Printing Office, where the customers are told this story of the devils:

'They are thought to ward off evil spirits, however these ones invite them… Printing presses, much to the displeasure of the church, used to print copies of the Bible. This made the book more accessible to commoners and limited the church’s ability to manipulate its contents. The church therefore condemned printers, citing them in league with the devil. However instead of backing down, the printers took on Lucifer as their patron saint.'

Those are the words of the reviewer, of course. If the content of this review is correct, then the tour guide has got it wrong and a correction is required. The advent of the printing press did present challenges (and opportunities) for organised religion, but Satan is not the patron saint of printers (see instead John Bosco, and Augustine of Hippo). I'd assume that Satan is not the patron saint of anything. Satan isn't even a saint. (The review also relates another tour story about the Printing Office that also seems to be untrue, and that is covered here).


A three-storey brick building facing William Street was constructed during 1872-74 (and is still there today as the Public Service Club), and extended with a three-storey brick building erected along Stephens Lane (1884-87). The complex was further extended in 1910-12 with the erection of the three-storey brick building on George Street. The importance of the printing office to a functioning democracy was reflected by its proximity to Parliament, and the high quality of the buildings themselves. It is inconceivable that modern state governments would build such quality structures, never mind adorning them with finely-sculpted statues and reliefs.

The gargoyles were lifted into position in October 1911:


‘The Printers' Devils.’
Two huge stone figures with sardonic grins on their hard faces were swung into position on the top of the third story of the additions to the Government Printing Office yesterday. From their giddy height they look down on to the traffic below. On the shields which they clasp in their hands is inscribed: ‘G.P.’ - Government Printer. These symbolise that mythical individual supposed to form part of a printing establishment - the printer's devil. The Government Printer is to have a double supply - hence two figures have been carved out and placed in position. Yesterday they were the subject of much curiosity, and speculation. The only thing wanting to complete the symbol is a plentiful supply of printers' ink to the faces, and a couple of aprons of the colour of coal! (Brisbane Courier, 25 October 1911)


The Printing Office staff started holding annual balls in 1940, and the decorations for the first event had a 'printer's devil' theme.

The George Street Printing Office closed in 1983 and after some demolitions and modifications to parts of the wider site it was heritage listed in 1992.

In addition to the seven outside the printery, there was at least one more devil inside the building, as shown in this photo of one of the offices in 1921: 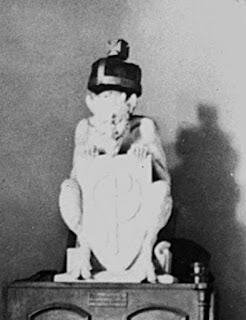 A close-up of the devil on the safe reveals it to be wearing some kind of hat (a crown?) with a Maltese Cross (Queensland government symbol) on the top. Perhaps this was a bit of public service office humour.

I wonder where this rather splendid ornament is now?

Email ThisBlogThis!Share to TwitterShare to FacebookShare to Pinterest
Labels: Brisbane