The Fakelore Finger of the Old Printing Office

During research for an article about the sandstone devils on the walls of the old printing office on Brisbane's George Street, I came across a couple of online reviews of a ghost tour that stops outside that building.* The tour guide - reportedly in a 'prophetic, Lord of the Rings-esque voice' - relayed a rather graphic story of blood and horror there, as you might expect to hear on such a tour. However, when I looked for further details about the gruesome events described in the story, there were no actual historical records to support it. Did it really happen, or was this a case of 'fakelore'?


The tour guides are not historians, so these tours are strictly scripted and the story here is quite specific in some details. In the words of one reviewer):


'And in one particular incident here, an apprentice printer (it’s believed) attempted to fix the gut-wrenching noises of a printer against the wishes of his seniors. He stopped the machine, went inside and after a few minutes it started again, as did his harrowing screams. Legend has it, it took three days to clean out the machine and all that was left was his wedding ring finger, ring still intact. Lily [the guide] tells us the printer still exists in Brisbane’s archives, and unlike other printers - which contain black ink stains - this one is still stained blood red.'

Another reviewer wrote that the customers were told about


'...a gruesome workplace accident involving a printing apprentice (spoiler - all that was left was a flayed skull and a finger, still wearing its wedding ring).'

This seems like the kind of tragic - even spectacular - event that should have attracted a lot of media coverage when it happened. My research turned up a host of 'lesser' incidents at the Printing Office that were deemed newsworthy, such as when William Martin had the top of four fingers cut off in 1895. There was coverage of Charles Hampson dying of heart disease in the printing office in 1911, as there was when James Lytton had his hand crushed in a machine there in 1926. There was also mention of the nightwatchman who collapsed and died on the William Street side of the office in 1931.

There were numerous accidents at other printing presses around Brisbane and Ipswich reported in newspapers. A 17-year-old named James Robertson died at the 'Watson and Ferguson' printery in 1893, after being pulled into the machinery. He was pulled three times around the shaft and lost an arm, and suffered several broken ribs and two broken thighs. He also lived long enough to make it to hospital. This suggests that it is unlikely that a printing machinery could reduce a human body to no more than a single finger, as claimed in the tour story. 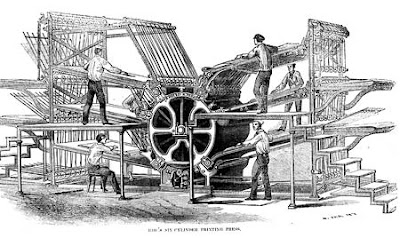 The following is another example of a lesser accident being reported:


'Sensational Accident. At a Printing Office. Caretaker Falls into Flywheel.
On Friday, William Booth, the caretaker of Messrs. W.H. Wendt and Co., printers and stationers, Elizabeth street, when starting tho gas engine, slipped and fell between the spokes of the flywheel. He was quickly extricated by the other employees, but not before his head was severely cut and crushed. When the ambulance was sent for it was thought that Booth was dead. He was, however, after first aid had been rendered, quickly conveyed to the General Hospital, and after treatment was enabled to proceed to his home. Mr. Booth, who is about 55 years of age, is considered to have had a miraculous escape from being killed.' (The Telegraph, 20 May 1905)

Even the story of a printing worker whose workplace accident left him with no more a bruised hand made the news in 1926. And yet, there is not a single mention of the apprentice-mincing accident described in the tour story anywhere in the records. The reportage on these other incidents shows that it would not have been ignored, so it would be fair to suggest that the incident never really happened. I asked around a few friends, but they knew nothing of any such accident. Which brings us to another big question: Where does this story come from?

Despite the absence of basic information such as names and dates, some quite specific details are provided in the tour story, such as the finger with the wedding ring. Most apprentices were boys and unlikely to be married, but no details of the alleged victim's age or identity are provided in the story. Then there is the old printing machine being stained an unwashable 'blood red', implying that the machine had been soaked in blood that could not be removed. These are minor details of the story, but they must have some origin. How did they make it into a tour script?

Oral History is a possible source, but in the absence of documentary evidence it remains pure hearsay. I have written tour outlines myself and facts are always the starting point for a story, and they are double-checked. The way I see it, if you are selling History to people, as a product, then you have an ethical obligation to make sure your content is based in fact. It is not good enough to simply prefix these claims with 'legend has it' or 'it is believed', without explaining to paying customers that what you just told them probably did not happen in real life. Failure to do so opens the door to 'fakelore'.


Fakelore is a recent label for an old practice. In its broadest sense, fakelore has been defined as 'inauthentic, manufactured folklore presented as if it were genuinely traditional'. It can be applied to local history stories and urban myths that have no basis in reality. They come into being via bad research or outright invention and - if left to ferment for long enough - can end up being believed by a lot of people as fact. Once established, these stories can be hard to kill, as I discovered myself when writing about the widespread belief of people from my hometown that hangings used to take place there, despite solid evidence to the contrary.

When it comes to creating folklore, questions of intent are hard to prove. Is this 'finger' story a result of (very) bad research, or invention? Other people have analysed (non-ghost) stories from the same source and also found them to no supporting evidence or identifiable sources. these include tales about an imaginary morgue in one cemetery and non-existent roads in another. This cemetery tour review in the Courier-Mail also questioned the accuracy of information being presented to customers. I have documented a few examples of 'fakelore' myself, such as a cemetery 'Woman in Black' story. In my articles I have asked for any evidence to back the finger story up, but despite several stories being questioned in the public sphere over a number of years, there have been no defending counter-arguments from the tour business.

And so the questions remain.

This case does point to a problem with History tours, in that their content usually escapes the corrective scrutiny that historians apply to the printed word. This particular Printing Office tale is not the kind of data mistake that even professionals can sometimes make, such as getting a date or a name wrong. This is an entire start-to-finish story about an historical event that that simply never happened, and yet it is still being spread via tour stories.

These stories need to be nipped in the bud before they become accepted historical fact, and they should certainly disappear from these tour routines..