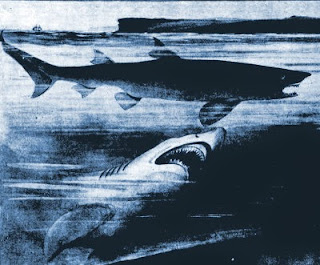 What is the most dangerous city-side swimming spot in Queensland? If you’re talking about shark attacks, the answer is clear. I have written before about fatal shark attacks in the Brisbane River, but the three (possibly four) deaths in that waterway don’t compare to the statistics for the much-smaller Ross Creek in Townsville, north Queensland.

Ross Creek is an inlet that runs through the heart of Townsville and has been a hub of human activity since the earliest days. While the Brisbane River is over 300km long, Ross Creek is a mere 4km. Despite this, more than 50 people had drowned in the creek by 1950. It is also the habitat of large crocodiles, and during 1907-37 at least eight people were killed there by sharks.

While the freshwater of the Brisbane River can only support Bull Sharks, the brackish waters of the Creek can potentially support more species of sharks (and crocodiles). And sharks in estuarine waters such as Ross Creek have been known to establish themselves and remain there for lengthy periods.


The events outlined below are of fatal attacks only and do not include the many non-fatal incidents, or the dozens of cases of animals such as dogs being killed in the creek by sharks.

William Williams
In February 1907 a group of eight or nine youths were taking a Sunday morning swim in Ross Creek when a nearby fisherman saw a shark fin about 60cm long emerge near them. He called the alarm and the boys struck for shore, but when they got there they found that one of their friends, 17-year-old William Williams, was missing. One of them had seen splashing were Williams had been, and the water there was ‘crimsoned with blood’. Williams had gone without a sound.

The police dragged the river for days afterwards with no result. The shark was reckoned to be up to 4 metres long, and attempts were made to catch it by baiting a line with a young goat. Five days later a member of the public spotted two legs in the river. A post-mortem showed that the shark had bitten clean through the abdomen and spine. Some lower internal organs were still present. It was left to the boy’s obviously distraught mother to identify these remains.

In the weeks following this tragedy a number of dogs were killed by sharks in the river, including one retriever that was bitten in half. The remaining part of its body was attached to a hook and used as bait, but the shark took that half too without getting hooked. Such attacks were happening on an almost daily basis and it was thought that the same shark – being of ‘enormous proportions’ – was responsible.

A shark hunting expert called Jim Walker came to town to try and catch the creature but he had no success.

Samuel Tristing
Five years passed before the next tragedy. It was New Year’s Day 1912 and a young man called Samuel Tristing was swimming with his friend in Ross Creek near the railways cleaning sheds when he was seized by a shark. He called out desperately but before anything could be done he was taken away. Tristings body was found by the police two hours later, disembowelled, flesh torn from the thighs, and both arms missing.

A few weeks later a big shark attacked and killed a horse in the river, and a hunting party set out to capture the fish. After a two hour battle they landed a shark reported to be about 4 metres long.

Jack Hoey
In January 1919 Jack Hoey, the father of six children under the age of 12, was crab fishing with a friend in Ross Creek. When they finished he went in the creek near the railway bridge for a swim, and he was wading out, with the water just up to his arms, when almost immediately a big shark gripped his leg and wrenched the limb off between the knee and thigh. Hoey’s companion dragged him from the water and an ambulance rushed him to the hospital. He had obviously lost a massive amount of blood and he held on through the night in a critical condition before dying in the morning. Hoey was 38 years old.

Robert Milroy
Even more horrific scenes followed in January 1922. Some unemployed men were in the habit of camping near the railway yards by the creek. Among them was Robert Milroy, aged 54, who entered the creek with three other men one Sunday afternoon with the intention of crossing to the other side for some prawning. Milroy was attacked and pulled under by a 3.5-metre shark, and very soon another four or five sharks were fighting over his body in the bloodied waters.

The police dragged the river for his body but found nothing. A fisherman helping with a net actually pulled in a 4-metre shark that then managed to escape. Milroy’s right leg was found some days later, stripped of flesh apart from the foot.

A few months later J Rennie, a recent arrival to Townsville, fell off the Victoria Bridge one night. He probably drowned, but when his body was found on the bank of the Ross Creek several days later it had no head and the flesh had been stripped from the legs.

Edward Hobbs
The next victim of the river sharks was 42-year-old Edward Hobbs. Walking along a concrete wharf by Ross Creek one afternoon in September 1929, Hobbs slipped and fell into the water below. The tide was low and he fell some way before landing flat. It was a case of being in the wrong place at the wrong time, because almost as soon as he hit the water a shark attacked him, ripping the flesh off both his legs below the knees. A second bite practically took his right leg off. Hobbs cried out and two men on the opposite bank immediately rowed to his assistance in a boat and drove the shark away, but he died just a few minutes after they got him back to the ferry landing.

Unidentified Male
Just three months after the death of Hobbs, a naked body was found floating in the Ross Creek near the Victoria Bridge. Nobody knew who it was, but it seemed to be a man about 50 years old, 6 feet tall, and with a ginger moustache. His right arm was missing and only the bone of his left arm remained. The flesh on his right leg had been ripped away, and his chest and abdomen had been ‘torn away’. A post-mortem revealed that he had died of shock and shark bite, and had been in the water for about 48 hours. He was never identified.

Arthur Tomida
The next fatality was 19-year-old Arthur Tomida, who died while prawning with his father in Ross Creek in March 1931. Their net had become snagged so the two men waded out into the chest-deep water, where Arthur attempted to free the net with his foot. Suddenly a large shark gripped the back of his leg, tearing most of the flesh from his thigh. He cried out and his father rushed to his aid, pulling him back to the bank about 3 metres away. Unfortunately a main artery had been torn away and Arthur bled to death within minutes, in his father’s arms.

William Tennant
Six years passed before the river sharks claimed their next victim. William Tennant was 33 years old and well-known as a member of the North Queensland representative rugby league team. After having a few drinks, he swam across the Ross Creek one Saturday night in May 1937 to ‘take a short cut’ to the city, and had almost reached the other side when he was attacked by a shark. He cried out for hep and a ferryman hurriedly rowed over to the scene, but there was a swirl and Tennant was carried about 20 metres out into the water.

By the time the ferryman reached him, Tennant was ‘bleeding profusely from fearful injuries’. His left arm was gone, and his left leg had been stripped of muscle and flesh. He was rushed to hospital but was dead upon arrival, the cause of death later given to be cardiac failure, haemorrhage, and shark bite.

A 3-metre shark that had been seen near ferry pontoon that day was thought to be responsible for the attack, and baits were set the next day to catch it. This did not seem to succeed, although a 4-metre shark was caught one week later in Ross Creek (see photo below).


It should also be noted that at least five people were killed by sharks off the coast at Townsville during this time, making a total of 13 fatal shark attacks in the direct vicinity of the city during those 30 years. And then...

There has not been a fatal attack in the Ross Creek since. Shark attack deaths continued to occur off the coast, but none in the inlet. I'm not sure why this is the case. Is it down to more sensible use of the creek, or increased river traffic, the periodic pollution (as with the Sugar Shed Fire of 1963), or just good luck? If anyone has any ideas on this, I'd like to hear them.

For now, reading through the horrible events that did take place in the creek all those years ago, we should just be thankful they have stopped.

Thanks to Liam Cussen for sending the following information, June 2020.

"I've recently read your article regarding historic shark attacks in the Ross Creek in Townsville. Great read by the way. Confirms a lot of stories my old man used to tell me when I was a kid.

Now mate I saw your concluding thoughts about why shark attacks ceased to occur in the Ross Creek after 1937. I have the reasoning behind this. All but anecdotal evidence passed through local knowledge and my family who has lived in Townsville/Burdekin since before WW2.

The Townsville Meatworks started in 1891 and closed 1995 was situated right on the banks of Ross Creek (see attached). As part of operations there, they would throw cattle carcasses into the Ross Creek as waste. Thus attracting bull sharks and crocodiles and as a result, the area had the most shark attacks anywhere in Australia in the early days.

I'm sure you could dig up more information regarding this, but these are the stories my family has discussed with me many years ago and it really makes sense. The meat works attracting shark activity due to an abundant food source and eventually people figured it out and the shark attacks reduced. I've also been told they stopped throwing the carcasses into the river well before modern times, around the 1950's. Makes sense as to why there's now almost no shark activity in the Ross and why there's been no fatalities since 1937.