The Sad Case of the Belanglo Forest Ghost Tours

In July 2015 there were national (and even international) headlines about disrespectful 'ghost hunters' in Australia who went too far and brought the wrath of the public, the media and the state government down upon themselves.


The story was about ‘Goulburn Ghost Tours’ in New South Wales and their Belanglo State Forestry ghost hunts/tours. The forest is where psychopathic serial killer Ivan Milat buried seven of his victims in the 1990s. Tour customers could pay $150 per head to visit the forest between 6pm-3am with ‘paranormal equipment and training, snacks and billy tea.’

The mere act of selling a ‘hunt’ for the alleged ‘ghost’ (however you define that) of a real person - especially one who died within living memory - is unethical enough. The main issues are selling use of a fake product (scientificky ghost-o-meters) and disrespecting the dead and their loved ones. What turned the media mob onto Goulburn Ghost Tours was the tactless way in which they sold the event like it was a slasher movie. The promo blurb for this ‘Extreme Terror Tour’ included such statements as:


"Come with us to Belanglo where Ivan Milat buried the bodies of his victims! Once you enter Belanglo state forest you may never come out…"

According to this report, the now-deleted advertising ran like this:


"Are you ready to turn grey overnight? Come with trained and experienced Paranormal Investigators to Belanglo State Forrest where horrific crimes have been committed and bodies have been found. Learn about his crimes and use paranormal techniques to help solve the baffling murder of Angel, believed to be murdered AFTER Ivan Milat was jailed!"

The creators of the post continue to try to entice crime enthusiasts to the tour by asking them if they feel like they are being watched and if there is another victim just waiting to be found. When the shit hit the media fan, the New South Wales government stepped in to ‘block’ the tours on the technicality of the group not having a permit to enter the forest. 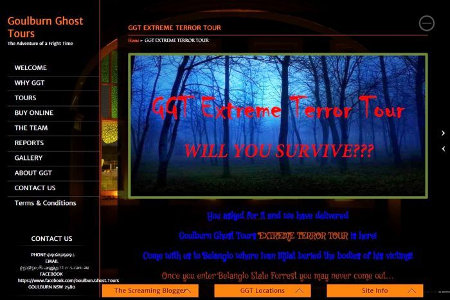 The Goulburn Ghost Tours website and Facebook page were quickly taken offline. In their defence, tour manager Louise Edwards claimed that the tour was run ‘with sensitivity’.


“Lots of people know about Ivan Milat, but not about the people he murdered,” Ms Edwards said. “We wanted to remind people that the victims are real people. They are not just victims of Ivan Milat. They are more than that. We don’t want people to forget about them.”

And what better way to reframe these people as being more than ‘just murder victims’ by charging ‘Extreme Terror Tour!’ punters $150 to visit the scene of their murders and try to find their ghosts?

To my mind, the only real difference between the Balinga State Forest ghost hunts and the ones at Brisbane's Boggo Road (2015) was in the marketing. Goulburn Ghost Tours clearly went over the top in calling their product an ‘Extreme Terror Tour’. The marketing spin for Boggo Road ghost tours and hunts was more subdued, thanks to pressure on the state government from community groups demanding that the prison’s history be treated with at least a modicum of respect. The Boggo ghost hunts were actually banned by the Queensland Government until 2014 because they were deemed to be too disrespectful. The ghost hunts restarted after certain ‘political manoeuvrings’ but were blocked again after a change of government in 2015.

Regardless of the content of their advertising, what all these commercial ghost hunts have is common is that they commodify the tragedy and grief of other people by taking customers to places where murders and/or suicides took place and trying to find their 'ghosts'. They are in the business of cheap thrills. And they often do this against the expressed wishes of those most affected by the tragedy.

What I would like to see is more government regulation of this commercial activity. That means a ban on ghost hunts in all government properties, and strict approval for where other ghosts hunts may take place. We need ‘truth in advertising’ rules for when people advertise the use of electromagnetic field detectors as ghost-o-meters. And hunts should only be allowed at specific locations after a certain amount of time has passed since any death took place there.

As it is, there is nothing stopping ghost hunters crawling over the scene of every horrific murder or suicide in Australia, even recent ones. And this does happen, usually in secret. Groups tend to be more careful these days, but a few years back you could dig around the Internet and find ghost hunters discussing their clandestine exploits. For example, back in 2009, people were visiting a spot at Deep Water Bend, near Bald Hills on Brisbane’s northside. The story was that the bound-and-gagged body of a murdered woman was dumped there and her ghost now haunted the spot, where her distraught spirit could be heard ‘begging for help’.  How would that thought make her loved ones feel?

I also heard rumours of ghost hunters snooping around the place where the body of Brisbane murder victim Alison Baden-Clay was found a few years back.

What this indicates to me is that there are people interested in ghost hunting who have a real lack of empathy for other people. This doesn’t include all paranormalists, as I know some very good people interested in the subject, but there are clearly a few who just don’t get it. They seem determined to prove that, despite your most fervent wishes, your loved one is NOT resting in peace.

I hope that the recent government inteventions with Goulburn Ghost Tours and Brisbane Ghost Tours act as a reminder to other ghost-hunting groups to think hard about the ethics of what they are doing, especially when it comes to respecting the feelings of real people who are struggling with traumatic loss in their lives. Their pain is not your gain.

These people include this woman, whose 17-year-old grandson was lured into Belanglo State Forest in November 2010 by Milat’s great-nephew and tortured and killed with a double-sided axe. She had this to say about the ghost tours there:

“It is a money-making tour at our expense,” she said. “I can’t stop people from running these ghost tours, but I think it’s disgusting. They are taking advantage of our grief.”

Mrs Auchterlonie said her family was only just “getting some normality back in our lives”.

“We are hurting and this is just opening up old wounds again,” she said. “We are just trying to become normal people again. It would be same for the families of all the backpackers who were murdered there.”

In a similar vein, the granddaughter of a man killed at Boggo Road in 1966 wrote to me about her family’s treatment by some in the ghost industry:


“For years my family have been tormented with nonsense in the media and on the internet about my grandfather’s death. This was a traumatic event that affects all of us to this day. My own father wasn’t much more than a boy when Bernard was killed, and the sadness and struggle the family endured shaped the adults they became, and the children that they went on to have. The loss has been compounded in the years since by an awful man perpetuating stupid stories and rubbish about Bernard. He conducts tours and interviews focusing on my grandfather's supposed ghost... This man has even contacted me, as have a few ‘internet crazies’. It has all been very upsetting...

Personally, the stories are more than ‘vague and unconvincing’. They are also hurtful and distressing. And it makes me so angry that people are trying to make money by exploiting my family history. This man… is still a very large part of some people’s lives.”