The New Farm Shark Attack of 1862: Fact or Fiction?

One of my favourite subjects of historical research - no doubt driven by my irrational phobia of being eaten alive underwater - is Brisbane River shark attacks. There are slim pickings in the modern era, but back in the 19th century people were much more inclined to jump in the river. In a sub-tropical environment with no refrigeration, no swimming pools, no on-tap domestic water supply, no air conditioning, the sparkling-clean estuarine waters were a great temptation, especially in summer. This was also the same time of year that some rather large specimens of the river’s apex predator, the Bull Sharks, were in abundance. Humans and sharks (also dogs, as seen in this story) are an eventful mix. 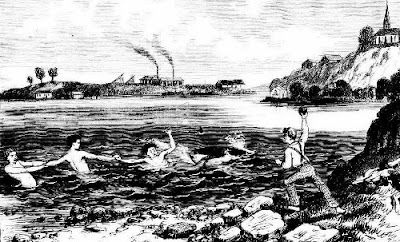 One of the earliest recorded fatal attacks (although there must have been plenty during the millennia of previous Aboriginal activity in the Moreton Bay region) took place in December 1862, but it has to go down as ‘unconfirmed’ because there was no official record created. It involved Aboriginal people, who at the time were still ‘outside the system’, so there was no death certificate, no police report, and no cemetery funeral to be had.

The only European witness was a young boy named Tom Murphy. He was shooting birds near the first Brisbane racecourse, which had opened near New Farm in the 1840s. The exact location of this racecourse is unclear, although it was probably in the vicinity of the modern-day Brisbane Powerhouse. Tom was evidently a decent shot and he managed to hit a flying bird, but it fell wounded into the middle of the river.

According to Tom, a group of Aborigines were camped on the opposite bank. One of them was a young boy who saw the bird hit the river and immediately jumped in after it. He had swum about thirty yards from the bank when he noticed a large shark nearby. The boy quickly turned round and headed back to shore but the shark was in pursuit. The youngster dived three times, but reportedly ‘upon his rising the third time the shark was seen to turn upon his belly and seize the boy, who gave one scream and disappeared’.

His family and friends screamed out but there was nothing they could do. They were heard mourning loudly all night.

Tom was reluctant to officially report the incident because he thought he might get into trouble for shooting near the racecourse, but the story was relayed to the Courier newspaper by a reportedly ‘respectable correspondent’. A summary of the incident appeared a few weeks later, noting that victim’s body had disappeared and ‘was never afterwards seen’.

I treat this account as being probably reliable, if only because of the detailed and realistic description of the attack. It was also in the same stretch of river where, 60 years later, a man carrying his young son out to a moored boat was attacked by a bull shark. The father was badly injured and the boy fell into the river and was swept away, also ‘never afterwards to be seen’.

The 1862 attack certainly has more credibility than a story which, quite bizarrely, formed part of a real estate ad for Newstead House, near Breakfast Creek, in 1878. The ad featured a fictional conversation between Captain John Wickham, a resident of the house in the 1840s, and ‘King Talloo-woobulloowagoapilly’ (aka ‘King Billy’) about a shark attack that took place near Newstead in the years preceding European arrival at Moreton Bay.

‘King Billy’ recalled his group, including a young sister Eullah holding onto their small brother Oollu, swimming in the river one morning. A shark was spotted and a scream went up as the people swam for shore. The shark’s jaw gripped Eullah:


‘My dear sister’s form, with her long hair floating above the surface, was seen amidst the foaming spray, caused by the velocity with which she was being hurled through the water, while each hand encircled the ankles of Oollu, whose little head just peeped above the wavelets, fortunately face upwards… Eullah’s life’s blood mingled in the track she was forced along…’

The two children disappeared beneath the surface and hope seemed to be lost, but a young man named Warkoona (also identified as ‘Duke of York’, leader of the Brisbane clan in a similar ad) had swum to their rescue. After an underwater struggle the shark surfaced, ‘his entrails protruding’ and then sank, quite dead.

The children survived, although Eullah lost the calf of her left leg. Warkoona had cut the shark’s belly open with the fish-bone he had in his hair. He later married Eullah.

Now there could be a germ of truth in the story, but the style was so excruciatingly awful it is hard to take seriously (for example, as the children’s mother watched this scene her eyes ‘seemed literally to shoot in and out of their sockets involuntarily’). Unlike the Tom Murphy account of 1862, it is best ignored.