The Story of the 'Executed Prisoners' Plaque

‘Some traces of antiquity are so faint that only contrivance secures their recognition. In the absence of signposts, how many visitors to an old battlefield could tell that it was an historical site? But for markers, people would generally pass by most ancient monuments unaware of their antiquity.’ (David Lowenthal, The Past is a Foreign Country, 1985) 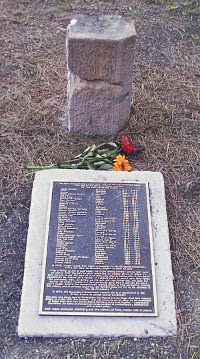 If you are a regular visitor to the South Brisbane Cemetery, then you might have noticed a sandstone block with a plaque near the big green shed in the centre of the cemetery. This marker, unveiled in 2005, identifies the graves of the 42 prisoners who were executed in Boggo Road during 1883-1913. I was the historical researcher for this project, which spanned two years from the time that the Boggo Road Gaol Historical Society approached the Brisbane City Council with the idea. It was, from start to finish, a bit of a strange project because someone kept trying to throw spanners in the works to stop it, and in retrospect none of the trouble-making made any sense.

The fact that the prisoners had committed capital crimes made the project a sensitive one to begin with, and an early idea to have images of the prisoners on the plaque was discarded, as it was felt this might be 'sensationalist or macabre’. Problems had previously been caused there when a tour operator placed a small plaque on the grave of Patrick Kenniff in 2003, marking the centenary of Kenniff’s execution. The invitations for the ‘solemn and sad occasion’ of the unveiling referred to attendees as ‘mourners’ and asked that they wear black. Prayers were read at the graveside and flowers were laid during the pro-Kenniff ceremony.

Unsurprisingly, about 30 complaints were received from descendants of the people that Kenniff was hanged for shooting, chopping up and burning.

It was rather hypocritical, then, that the same tour operator later tried to stop our project by complaining that it would ‘affect the historic validity of the site’, and somewhat airily claiming that that the official rationale for burying executed prisoners in unmarked graves was that ‘beyond execution was to be eternal punishment in unconsecrated ground and the graves were to remain unmarked; deliberately forgotten’. Codswallop. An 1834 Australian law stipulated that the bodies of executed prisoners could receive full funeral rites, so ‘eternal punishment’ was obviously never a consideration. The graves were unmarked simply because the Queensland Government (which owned the corpses) didn't want to pay for headstones.

And as a member of the public wrote to a newspaper in defence of the project:


‘He refers to the practice of and attitudes of the times – “leaving graves unmarked, unconsecrated and deliberately forgotten, to be eternally punished”. Is it good for society to carry on such an unforgiving attitude? To mark the graves does not, necessarily, mean to honour the dead but to remember the guilty and the ultimate penalty they paid. In doing so we remember their victims.’ (Courier Mail, 2 August 2004)

Another attack on the project involved the claim that not all the prisoners were buried there, that a couple were buried 'elsewhere' and there was secret 'proof' of this (that the complainer refused to produce when challenged). The cemetery records tell a different story of course, and in later years the person making these claims had to concede that he was wrong. Which we knew anyway.

The project received BCC approval in mid-2004 and the planning of form and content began. The marker was to be comprised of a plaque and accompanying stone, with the plaque containing a list of the prisoner’s names, years of birth and death, and place of origin. Underneath this were Ellen Thomson’s words on the gallows when she was hanged in 1887, ‘Goodbye everybody; I forgive everybody from the bottom of my heart for anything they have wronged me in this world. I never shot my husband, and I am dying like an angel’. This quote raised objections from the tour operator, who felt it presented a sympathetic view of prisoners. It was subsequently replaced with a statement from Joe Lesina, a politician who had pioneered the parliamentary push to abolish the death penalty in Queensland:

‘The criminal is not a wild beast… he is an erring brother whose feet have wandered from the narrow path which we all weakly strive to follow. To take his life is not the way to cure him; you only brutalise him. It has been condemned by history as a failure… If I should fail I can only fail and somebody else as surely as the sun will rise tomorrow, will take the matter up where I leave it. I feel perfectly satisfied that it will not be many years longer before the humanitarian feeling now spreading through the colony, and through all civilised communities, will demand once and for all the abolition of flogging and the death penalty.’ (Queensland Parliamentary Debates, Vol.82, p.60)

The project was supported by politicians and such groups as the Brisbane Council of Elders, but the tour operator STILL wanted to stop it. He even contacted the Queensland Police Union about the project, and a November 2004 editorial in their journal criticised it, arguing that the historical validity of the graves would be compromised, and that the marker was intended to commemorate the prisoners. The QPU were reassured that the project was not intended to commemorate ‘killers’, and in the absence of any further opposition the BCC and BRGHS agreed upon the final version of the plaque in early 2005. A sandstone block from Boggo Road stood behind the plaque, embedded in a concrete base. The top lines of the plaque read, ‘This stone marks the place where forty-one men and one woman are buried. They died by the gallows of Boggo Road Gaol. Only one man’s grave was marked’. This was followed by the list of biographical information about each of the prisoners. Underneath this was the Lesina quote, and then:

‘This stone was placed here by the Brisbane City Council and the Boggo Road Gaol Historical Society on 6 May 2005. This sandstone block was carved by convict labour for the construction of Boggo Road Gaol. Two broken pieces that have come back together – representing Reparation; the fabric of imprisonment reappropriated to commemorate a humanitarian shift in social policy. May these executed prisoners and the victims of their crimes rest in peace.’

The unveiling ceremony was held on a lovely morning in May 2005 and attendees included local and federal politicians, several religious ministers, descendants of the victims, and representatives from the Brisbane Council of Elders, heritage organisations and various government departments. The first speaker, from the Council of Elders, set the tone for the ceremony when she described the executed Aboriginal and South Sea Islander prisoners as her ‘forgotten brothers’. The local Councillor who unveiled the plaque - and the Federal Senator who spoke after her - both voiced their opposition to capital punishment. The tour operator then gatecrashed the ceremony and demanded that he be allowed to speak. To the obvious bemusement of the guests he declared his support for capital punishment and described the prisoners as ‘vile’. It was a badly-judged tirade that went down like a lead balloon. The following week, in a newspaper article about the unveiling ceremony, he described the marker as ‘totally offensive’. Michael Banks of the BRGHS countered that:


‘The plaque’s focus was to inform and educate the public and to show that Queensland became the first part of the British Empire to abolish capital punishment. If people think we are glorifying criminals, which is what these people were, then they have missed the point.’ (Southern News, 12 May 2005)

The marker was actually making several points. The conflicting opinions of it were shaped by differing attitudes to capital punishment and criminals, and also to the intended function of the plaque. As for the persistent attempts to derail the project and even disrupt the unveiling ceremony, well, we think the motives were more linked to commercial interests than any genuine concerns.

As a result of this process, the marker evolved from being a local history plaque into something that also commemorated the political shift to abolition, a shift that was the first of its kind within the British Empire. It also served to act as a defacto gravestone. So it was that the South Brisbane Cemetery plaque came to represent heritage significance at local, State and international levels, and even took on a religious significance.


The plaque project was the subject of a grant-funded documentary called ‘The Plaque’. It was produced by Griffith University academics Ann Smallwood and Marilyn Carney.