Is Toowoomba the Most Haunted City in Australia?

Reading the related article, however, we soon realise that that logic has very little to do with any of this. What we find is a lazy media outlet using amateur ‘pop paranormalism’ as page-filling clickbait.

‘A growing number of residents in the regional Queensland town of Toowoomba are documenting a series of spine-tingling encounters with ghosts. The other-worldly activity is so frequent, a team of ghost hunters has set up shop in the not-so-sleepy town.’

So they say in the article. I’d guess that the allegedly ‘growing’ frequency of ‘other-wordly activity’ came after the ghost hunters set up shop. Members of the featured group - ‘Toowoomba Ghost Chasers’ - claim to have conducted hundreds of paranormal ‘investigations’ and found that the regional city (population 110,000) is ‘full of ghosts’.

Why would this be? As one member explained, Toowoomba's history ‘makes it a haven for spirits… It's one of the oldest towns in Queensland, and it has a violent past - it's like the wild west… Maybe there's a lingering presence from that bloody history.'

This statement doesn’t add up at all. Within Australia, Toowoomba would be a minor league player when it comes to violent history. And that’s in a country that - while having seen its share of spilt blood - has been relatively quiet in the global context.

The article has a number ‘spooky’ photos, which are bad even by the usual standards of grainy ‘what am I supposed to be looking at here?’ ghost photography. A bit of a shadow here, some unconvincing pareidolia (seeing patterns in random visual data) there… The story attracted nearly 200 comments and the vast majority of them were skeptical or outright mocking, especially of the poor quality of the images and the illogical interpretations of them. These included ‘Caroline’ from North Tamborine, Queensland, who wrote that ‘I absolutely believe in ghosts, but all of these photos are a stretch to say the least. The top photo is more than likely just pareidolia - seeing faces in things. There's a lot of shadows in all of the photos.’

‘One-Law-For-All’ from Manchester, UK, wrote, ‘None of the pictures are even slightly convincing...’, while ‘Diddlydee’ from Dunham-on-the-Hill, UK, added ‘These pics are even more awful than the usual ghost tripe you print. You could quite literally print any old picture, circle any vague shape or shadow and say it's a ghost.’

To be fair, I’d guess that most ‘paranormal investigators’ would also be unconvinced by these photos. 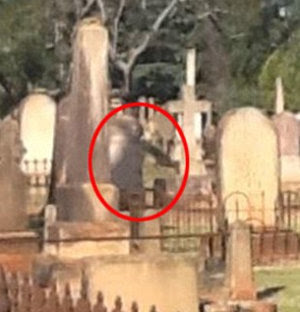 The photo above - from 2012 - is  alleged to be of a 'ghost hovering near a grave'. What it looks more like is shadows on a headstone creating a pareidolia effect. 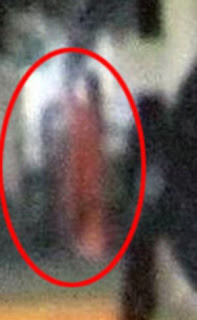 The 'Lady in Red' photo above shows a red area that is is quite prominent considering how grainy this photo is, suggesting it would have been especially clear to the naked eye. Unfortunately, without a less blurry image allowing identification of surrounding background objects such as the dark area next to the reddish area this looks like another case of grainy pareidolia. 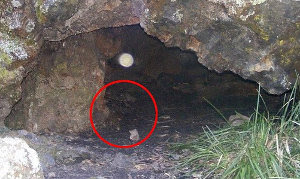 This particularly unconvincing photo was captioned with 'Ghost chasers believe the face of a supernatural spirit can be seen in this picture'. 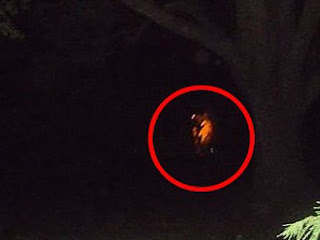 This one was captioned 'Toowoomba Ghost Chasers believe this picture... captured some sort of paranormal activity in the night'. That's an interpretation somehow even vaguer than the photo itself. 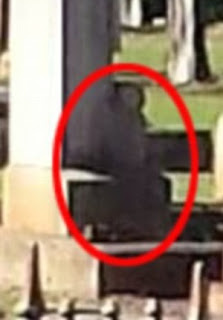 'A ghost sighting near a grave', according to the caption. Again, there is nothing unusual, although pareidolia might suggest the face of Kermit the Frog: 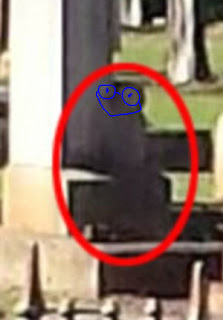 These people seem to use the word ‘believe’ a lot, when phrases like or 'might be' or 'looks a bit like' would be more appropriate. There are more, equally unconvincing ghost photos in the article, such as this one with the claim that 'Some experts believe a 'little girl in blue dress with her arm around a little boy in black pants and jacket' can be seen': 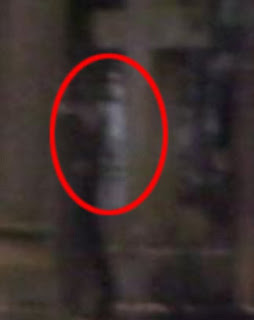 There was also a video in the article that was claimed to show ‘the horrifying moment a spirit eerily floated across a backyard’, and a ‘shadowy shape emerges seemingly from nowhere and then move around before disappearing’. One of the 'ghost hunters' said that they had not ‘seen anything like it in a long time', and helpfully concluded that 'It has to be something. There is no other explanation that we can come up with.'

While it is quite an interesting video, the attitude of ‘there is no other explanation we can come up with' says a lot. Genuine scientific investigators of allegedly paranormal activity (for example, Richard Wiseman and Benjamin Radford) apply imagination and intelligence to come up with natural theories for recordings like this. Back in 2008 Radford examined a very similar video to the one in the Toowoomba article and found that the most logical explanation was that it was a small insect on or near the camera lens (see ‘The Kansas Gym Ghost’).

Coming up with that case on the Internet took me less than a minute. It provides a feasible explanation. It seems incongruous that people who have closely examined this video for weeks or months would not have considered this.

Another video of ghostly activity at Disneyland has similarly been explained quite rationally as an ‘artefact of old equipment’. ‘It’s a ghost’ should always, always, be the very last resort. Unfortunately, for too many people dabbling in the paranormal, it is usually the first resort. Then again, media outlets are not interested in ghost hunters who never find a ghost, are they?

The article then covers Toowoomba’s supposedly famed 'lady in the red dress'* ghost, which is claimed to be ‘the ghost of Elizabeth Perkins, a resident who died in 1944’ after being struck by a train. Someone has got their dates wrong here, because Mrs Perkins was killed in 1929.

One of the ghost hunters said that he investigated this by heading to the train station and calling out the names of people he believed had died nearby ‘and therefore could be haunting the area’. He recorded changes in 'electromagnetic energy' with an electromagnetic field (EMF) detector. When he read Perkins’ name out, the meter ‘lit up’ and so he asked if it was Elizabeth Perkins, and claimed that ‘there were footsteps and she definitely walked past’.

This is so full of irrational assumptions that it is worthless. Aside from the fact that it takes an initial leap of logic (and faith) to link unusual phenomena with the unproven existence of post-death consciousness, and then asserting that consciousness can be associated with specific named individuals, the science here is completely false. EMF detectors record electromagnetic fields. As Benjamin Radford has written:

The problem is that there is no body of research showing that anything these devices measure has anything to do with ghosts. Until someone can reliably demonstrate that ghosts have certain measurable characteristics, devices that measure those characteristics are irrelevant… EMF detectors, ion counters, and other gear have no use in ghost investigations.’ (Skeptical Inquirer, Vol. 34.6, December 2010)

The evidence presented in the Daily Mail article makes a very weak case for the existence of ghosts, much less that Toowoomba is ‘Australia’s most haunted town’. For the sake of their own credibility, I'd suggest that groups such as Toowoomba Ghost Chasers be a lot more critical with the evidence they present. The reporter also failed to provide a counterview, and the result is the kind of B-grade newspaper filler that helps to sustain the ‘paranormal industry’ in its current misguided form.

I'd say that the people of Toowoomba should take these alleged ghost sightings with a very large grain of salt.

* This is abridged from an article originally published in July 2015.