The Historical Suffering of the Mentally-Ill is Not a Freakshow 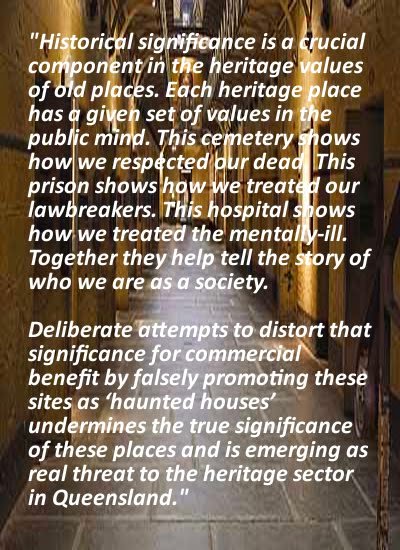 The other day I noticed a free local newspaper from the footpath with the headline ‘Haunted House Security Risk’.* The article was about the heritage-listed Wolston Park Hospital Complex buildings at Wacol, southern Brisbane. This place first opened as a mental health facility in the 1860s and has been known by other names, including Woogaroo. Part of the complex is now home to The Park - Centre for Mental Health which currently accommodates up to 148 patients.

The story was that police are concerned with the high level of ‘illegal and dangerous’ trespassing there. More than 20 people were charged after being caught attempting to enter the place during the past month, despite it being clearly marked as out of bounds and ringed with barbed wire. Sergeant Paul Hauff said that trespassing was a long-running issue at the site, especially as the older parts are in a state of disrepair and people sneaking around at night could get injured. He laid the blame with social media labeling the place as a ‘haunted house’, so we can infer that ghost hunters are the problem here.

I believe that the ghost industry promoting places such as municipal cemeteries as 'paranormal hotspots' indirectly encourages trespassing from people interested in that stuff, and this seems to be another case. The simple maths is that increased numbers of trespassers in heritage sites equals a higher possibility of damage, intentional or not.


Police and security patrols have been increased at Wolston Park as a result of these intrusions, and this is paid for via government coffers. The current situation is that paranormalist-inspired trespassing is increasing the workload for police and the bill for taxpayers. So it is quite unbelievable that Quest newspapers ran another article directly alongside the trespassing one which could only serve to actively encourage the very actions that the police were warning against. In this other article - which used a photo of concerned policemen completely out of context - Cameron ‘Jack’ Sim of Brisbane 'Ghost Tours' was demanding that 68 Wolston Park be opened for his own tours… because he claims it is haunted. I’m sure the guys at Mount Ommaney police station who hoped that the article would deter ghost hunters from 'illegal and dangerous' trespassing really appreciated that one.


I can think of four basic issues with the government caving in to these demands:

1. Who pays for this?
Sim is proposing that the state government spend hundreds of thousands (possibly millions) of taxpayer dollars for the benefit of his own small business. There may be legitimate concerns about protecting heritage here, but there are other community-based ways of fighting for that instead of demanding he be given (no doubt commercially exclusive) access to the place.

2. Disrespect Guaranteed
'Ghost Tours' have a demonstrated problem treating these places with respect. Their track record includes conducting mock occult rituals in Brisbane cemeteries and running farcical ‘ghost hunts’ in a prison where people with mental health issues killed themselves. Sim has even ignored the heartfelt pleas of distraught people to stop telling gruesome ghost stories about their loved ones. With this background, it is difficult to see how he would treat the sensitive issue of mental health with any respect. And it would only be a matter of time before the ghost-o-meters are pulled out.

3. Anti-History
This brand of alleged history can be summed up as what Sim himself admits is a ‘mix of urban legends and ghost stories’. These require no proof to back them up and are relayed without contextual analysis. In other words, not history. It has been shown that Ghost Tours are prone to using made-up stories and unverified tales, and this extract from the newspaper article shows that Wolston Park would probably get the same treatment:

“It was said the people of Goodna could hear the screams of women being unloaded into cages as they were brought by boat to the asylum. Wardsmen swore ghosts of patients paced the corridors in their gowns then disappeared into thin air”.

This shows why the history of Wolston Park is best left to real historians who can analyse the real issues and not reduce real people to ghost characters. Historical significance is a crucial component in the heritage values of old places. Each heritage place has a given set of values in the public mind. This cemetery shows how we respected our dead. This prison shows how we treated our lawbreakers. This hospital shows how we treated the mentally-ill. Together they help tell the story of who we are as a society. Deliberate attempts to distort that significance for commercial benefit by falsely promoting these sites as ‘haunted houses’ undermines the true significance of these places and is emerging as real threat to the heritage sector in Queensland.

4. The Patients Have Enough Problems Already
We really don't need to be making people with mental health issues think that they are staying in or near a haunted house.

There is a place for ghost tours, but not where they undermine a more important view of history or callously upset relatives of the dead. The solution to the trespassing problem at Wolston Park is not to provide ‘legitimate access’ for ghost hunters. It requires that we stop pandering to ghost hunters and allowing them to turn these places into 'Kentucky Fried Haunted Houses'. Wolston Park does not ‘need’ ghost tours to tell history when a museum of mental health would do the job much better. If Wolston House was to be restored, how about creating a legitimate history and education centre there with decent tours that showed a bit of respect and didn’t commodify the suffering of those who died there in a Sideshow Alley freakshow?

I’d also suggest that the state government would be better off redirecting funding back into mental health care programmes instead of pandering to the ridiculous demands of ‘ghost hunters’.

* This article was originally published in November 2014.