The Number's Up for Malaita Men on the Boggo Road Gallows

"And the mercy seat is waiting
And I think my head is burning
And in a way I'm yearning
To be done with all this measuring of truth."
(Mercy Seat, Nick Cave)

I once conducted a quiz on the Boggo Road Gaol Facebook page asking which demographic made up the greatest proportion of the 42 people hanged at Boggo Road, giving a choice of Irish, Aboriginal, Chinese or South Sea Islander as the answer. The answers were quite divided, and the whole exercise provided a bit of an insight into perceptions about hanging in colonial Queensland. Most people thought it would be Aboriginal people who suffered the most at the end of the noose, but the correct answer (as given by about 25% of respondents) was actually South Sea Islanders, which clearly surprised some people. The full range actually looked like this: 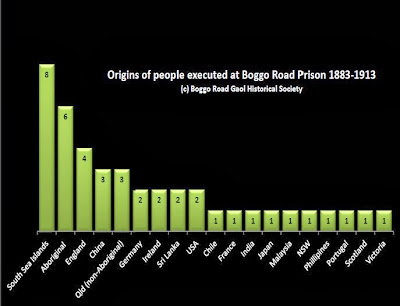 The overall make-up of convicted prisoners has always reflected historical circumstance. This is why Irish or British men formed a clear majority in early capital punishment statistics when they comprised the vast majority of convicts. The conflict between Indigenous peoples and the new arrivals also resulted in a steady flow of Aborigines into the prisons and onto the gallows throught the 19th century. It comes as little surprise that Aborigines formed the largest number of executions (21) in the overall totals, shown below: 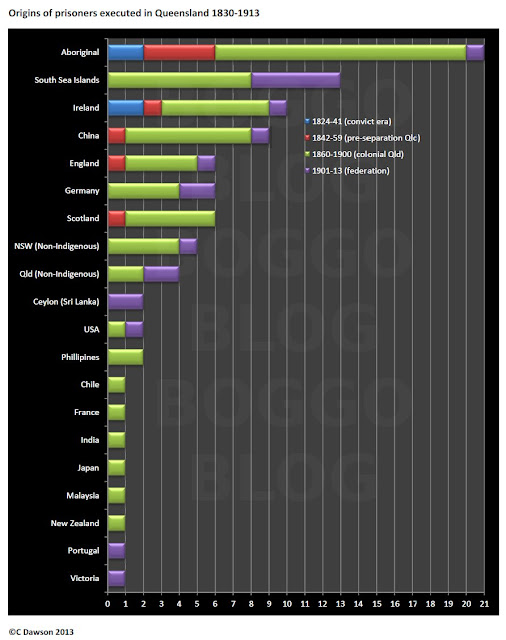 The end of the convict era and the subsequent arrival of waves of immigrants from around the world is also reflected in the execution data. The influx of Chinese labourers to work in regional Queensland during the early 1850s saw a spike of Chinese men held in Brisbane prison during that time, accounting for as much as 40% of prison expenditure in 1851. This was largely a result of workplace relations conflict between the immigrants and their new bosses, not to mention an ever-present backdrop of racist hostility towards non-white immigrants. As the chart below shows, a total of nine Chinese men were hanged in the colony, comprising about 10% of the overall total.

Germans were another prominent immigrant group in 19th-century Queensland, and six German men were hanged here. As far as Boggo Road goes, it was the arrival of South Sea Islanders (or more specifically, Solomon Islanders) from the 1860s onwards that was most reflected in the execution numbers. A total of 13 of these men were hanged in Queensland over the next half-century, eight of them in Boggo Road. The Islanders were brought to work in the sugar plantations in often-controversial circumstances, especially in the earlier years, and there was a lot of racial tension on the central coast. Many of the murder cases involving these men had an element of racial conflict in them, and it is clear that some Islanders did react to provocation in a swift and brutal manner. Most of the executed South Sea Islanders came from Malaita Island (see below) and were no strangers to a violent culture. The novelist Jack London was familiar with the region and described Malaita as "the most savage island in the Solomons". It is notable that even if the Malaita men were counted as their own demographic group, they would still comprise the largest proportion of Boggo Road's executed prisoners. Here is the full list of the hanged prisoners:

There was a great deal of unfounded paranoia in white communities regarding South Sea Islander crime, and prison authorities took to bussing in labourers from various plantations in the vicinity of Mackay, Bundaberg and Rockhampton to act as reluctant witnesses at the Brisbane executions of their countrymen. The intent was to make sure that word got back to the plantations and so help reduce capital crime rates. It is interesting that during the 1850s, the authorities had all-but abandoned notions that public hangings had a deterrent effect on witnesses, and introduced private executions instead. It seems that the rule was only applicable to white people (enforced viewing also occurred at a number of hangings of Aboriginal men).

The introduction of the White Australia policy in 1901 saw most South Sea Islanders returned home during the following decade, although some remained and more hangings did take place in Brisbane, the last being in 1906. And that is how South Sea Islanders gained the unwanted distinction of making up the largest numbers of those executed in Boggo Road Gaol.

A small but touching moment provides an epilogue to this article. In 2005 I worked with the Boggo Road Gaol Historical Society and Brisbane City Council to install a plaque near the graves of the hanged prisoners in South Brisbane Cemetery. It lists the names of all those who were hanged, and where they came from. Among other dignitaries, an elder from the South Sea Islander community spoke very movingly at the unveiling ceremony. Earlier this year I was taking a tour through the cemetery one night when I noticed a wreath and a bit of paper with writing on it by the plaque. It had been left there by "A.S.S.I.S.", which on further investigation turned out to be the Australia South Sea Islander Secretariat. It seems the eight men who died on the Boggo Road gallows were not to be forgotten.