The 100th anniversary of the last hanging to take place in Queensland fell on 22 September 2013.* In the scheme of things that might not be a big deal to the 21st-century populace of the Sunshine State, because capital punishment has slipped into the 'dark ages' of our memory, a time beyond living history. It barely even made the news when capital punishment was abolished here in 1922, so why should people care now? Truth is, the subject of hanging has become little more than a macabre historical curio in Queensland.

Even so, it is still something of a milestone, so what did we get in the news about the hanging of Ernest Austin, the last person to die on Queensland gallows? Was it placed in the historical context of declining support for capital punishment in the 1910s? Was there considered input from criminologists, legal experts, or experienced crime-and-punishment historians? Did we learn anything at all about the actual execution itself? 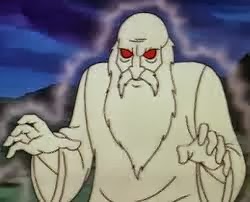 Unfortunately, the answer to all those questions is 'no'. What we got instead was a newspaper article with a 'ghost tours' owner talking as though Austin was a monster from 'Scooby Doo'. The first 60% of an article in Quest newspapers ran like this:


"Stories have been told over the past century of a ghost who would laugh maniacally, shriek like a banshee and look down upon prisoners from the upper floors of the Boggo Road Gaol. The ghost is said to be the spirit of convicted child murderer Ernest Austin, who has been "haunting" the jail since he was put to death in 1913 - the last man in Queensland to be hanged.

Gaol manager Jack Sim said the story of his execution and the ghoulish stories told about the infamous prisoner after his death were now the country's oldest continuously told prison ghost story. Both prisoners and wardens would retell the story to their peers, with the first known mention back in the 1930s.

"People have continued to talk about this ghost and its presence in the jail from not long after the execution of Ernest Austin" he said.

"It was said that late at night you could see him standing up on one of the upper floors of the jail looking down at you. In the 1940s, it was also being said that Austin's last words included laughter, and that the ghost would have this maniacal laugh just like him."

The remaining part of the article is just a sales pitch for the tours. The Brisbane Times website, which is usually a bit more credible, had a short audio clip along the same lines, again totally devoid of any historical analysis (and barely even a mention) of the actual execution itself. A short Channel 7 news item was little better.

For now, let's ignore the fact that the Austin ghost story is nonsense (as shown here) and that the execution took place in a whole other long-demolished prison building (an inconvenient truth for the tours). Why was the significance of, or the reasoning behind, the abolition of hanging ignored? Queensland was, after all, the first part of British Empire to do away with capital punishment. Why weren't any real historians consulted for these pieces?

Fortunately, some people took the subject seriously, including the Supreme Court of Queensland museum team. Their 'Path to Abolition: A History of Execution in Queensland' exhibition presented a mature and professional look at the whole subject, devoid of cheap stunts but brimming with considered research and a strong grasp of the educational needs of visitors. Needless to say, the Brisbane media were largely uninterested.

Maybe the whole sorry episode with the dumbed-down 100th anniversary news is reflective of a broader societal disinterest in the subject of capital punishment. Maybe some junior reporters and interns facing a deadline are happy just to accept self-promotional sensationalist media releases at face value. Maybe these reporters don't want to do the harder legwork of presenting real history. Because, no matter what some people might try and tell you, ghosts are not history.

* This has been abridged from an article originally published in September 2013.

The Tale of the Logan Crocodile

‘We are informed by a correspondent that on Thursday last Mr. William Hammel… of Beenleigh, observed a large alligator on the bank of the river near Loganholm ferry. Mr. Hammel procured a rifle and succeeded in wounding the saurian, which took to the water, and disappeared. From time to time of late the existence of an alligator in the Logan River has been alleged, but no credence has been given to these reports, as no authentic record exists of the occurrence of the alligator in Queensland rivers south of the Mary.’ (Brisbane Courier, 1 March 1905) 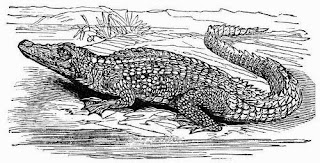 In the early 1900s a series of alleged sightings of crocodiles (or ‘alligators’, as they were often incorrectly termed at the time) in the Moreton Bay area were met with some scepticism, as this was thought to be too far south of the animal’s natural habitat. Despite this, the witnesses were usually quite adamant, like the man who was swimming near a sandy cove at Lota, on Moreton Bay, in December 1900 when he saw what he described as a ‘big log’ rise out of the water. He very quickly got back to shore but his friend supposed he must have seen a dolphin. However, one morning in 1902 he was in the same area looking across to Green Island and saw a ‘big animal of some sort’ running along a sand bank. He told a friend, who was sceptical and joked about it being his ‘sea serpent’, but a few days later she saw it herself through binoculars and claimed it to be a crocodile.


There are also stories from around this time that a crocodile in the Albert River nearly overturned a ferry boat full of schoolchildren. Another story had a man swimming in the Logan and then being grabbed and pulled under before escaping. Witnesses to this event stated it was a crocodile. However, I have as yet found no corroborating evidence for these stories.

Another sighting took place on Fisherman’s Island, at the mouth of the Brisbane River, where a man claimed to have seen a crocodile with a ‘bunged-up’ eye. David Drennan, the lighthouse keeper at Fisherman Island, also reported seeing a crocodile near there in 1898. He estimated it to be about seven feet long. It was lying on the mud, and upon being disturbed it disappeared in the river. Drennan inspected its tracks and recognised them to be those of a crocodile.

A few newspaper stories in March 1892 referred to the supposed presence of a crocodile in the Brisbane River. A man fishing from a punt near New Farm claimed that an ‘alligator’ charged at his boat and he rammed one of his oars down the creature’s throat before heading for the bank. The croc gave chase but was apparently distracted by a barking dog on the shore, allowing the man to scramble ashore at Breakfast Creek.

There was some scepticism over this tale, but over the following weeks many more people claimed to have also seen it. There was talk of a hunting party being assembled to hunt the animal, but it seemed to have long gone and was never mentioned again.

Speculation reached fever pitch after Hammel shot and injured the crocodile in the Logan in February 1905. AJ Boyd recalled that back in 1870 he owned the Pimpama-Ormeau sugar plantation about 50km south of Brisbane. The plantation was next to a large swamp, and one day the manager told him that he had been sitting near the swamp when he heard a crackling noise in the nearby rushes, and a ‘long iguana-like animal came into view on the edge of the water’. It was, he said, ‘either the bunyip or an alligator’. Sometime later, during a drought, they burnt off the reeds by the water's edge and noticed strange tracks there. In later years, Boyd saw crocodile tracks near the Herbert River and realised they were the same type as the ones he had seen at Pimpama. He was then convinced that there had been a crocodile on his plantation, and he even suggested that it could be the same one that Hammel had shot at.

A plausible explanation soon emerged for the presence of the animal so far south. It was said that about nine years earlier two ‘well-known’ Brisbanites had received the crocodile as a Christmas gift from some northern friends. During the night it escaped from the case it was contained in and vanished without a trace. About a week later some fisherman reported seeing a ‘strange monster resembling an alligator’ off Fisherman Island.

A few weeks after the Hammel shooting, fishermen spotted the crocodile on mud banks at Garden (Tindappah) Island, not far from the mouth of the Logan. It was next seen in June 1905 when it was shot at by Charlie Goetsch in the river opposite his property near Waterford West. The wounded animal then floated upstream to a ferry landing near the Logan village, where it was found dead a few days later by local storekeeper Alf Hinds. A few other men arrived and they pulled it up onto the bank.


According to the Brisbane Courier, the crocodile measured a substantial 12 feet 7 inches long (3.83 metres), and its stomach contained corn, several ducks and small turtles. Excited locals gathered to inspect the new curiosity and pose beside it. It was originally intended to stuff the animal and keep it in Logan, but later reports suggest that its skin was displayed on a Logan Village school wall for many years afterwards. The photo below shows a child posing next to the freshly-skinned crocodile.


No crocodiles have since been sighted this far south, although one did turn up in the Mary River, near Maryborough, in 2012.

Postscript
The following story appeared in the Brisbane Courier in 1926: 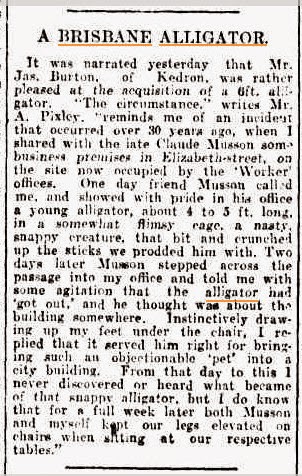