The Bunyip vs Jenny Greenteeth

‘The average bush youngster has a horror of darkness, and talks in awe-struck whispers of hairy men, ghosts, and bunyips. This fear is inculcated from babyhood. The mother can’t always be watching in a playground that is boundless, and she knows the horrors that wait the bushed youngster, so she tells them there is a bunyip in the lagoon, and gigantic eels in the creek; and beyond that hill there, and in yonder scrub, there is a ‘bogey-man’. Those fairy tales keep the children within bounds - until they are old enough to know better.’ (Edward Sorenson, Life in the Australian Back-Blocks, 1911)

In his 2004 book Bunyips: Australia’s Folklores of Fear, Robert Holden places the existence of ‘bunyip’ stories within a socially functional framework, much like Sorenson had back in 1911. These were stories that were told to control the physical movement of children, to keep them away from places where they might drown, such as waterholes and rivers. 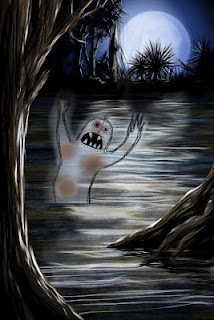 As the mythographer and cultural historian Marina Warner observed, mythical, malevolent beings like this embody deep-seated fears and can be found in cultures around the world. They give anxieties a tangible face and erect psychological warning signs around dangerous places. Folklorist Reet Hiiemäe has written along the same lines:

‘Throughout centuries human fear has induced the emergence and formation of folkloric phenomena. It is characteristic of human nature to fight against fear, trying to reduce or prevent it, and this aim reverberates in the folk narratives.’ (Reet Hiiemäe, ‘Handling Collective Fear in Folklore’, Folklore, vol. 26, April 2004, pp.65-80.)

The Aboriginal Monster
There are a wide range of ‘monsters’ in Australian Aboriginal cultures, each one relevant to their location. Flinders University lecturer Christine Nicholls has described desert regions being home to ‘roaming Ogres, Bogeymen and Bogey women, Cannibal Babies, Giant Baby-Guzzlers, Sorcerers, and spinifex and feather-slippered Spirit Beings able to dispatch victims with a single fatal garrotte.’ The underlying message with such stories is listen to your elders, don’t wander off into the desert. A ‘soul-destroying, devouring, malignant power’ called 'Mamu' is part of the culture of Aboriginal people in the eastern part of Australia's Western Desert, and anthropologist Ute Eickelkamp argued in a 2004 article that adults there ‘commonly use the threat of demonic attacks to control the behaviour of children’.

The deep waterholes and rockholes of Arnhem Land present a different kind of danger, and so are occupied by ‘murderous, humanoid fish-maidens who live in deep, biding their time to rise up, grab and drown unsuspecting human children or adults who stray close to the water’s edge.’ Again there is a message in tales of these ‘Yawk Yawks’ - stay away from dangerous places.


‘At one level, Yawk Yawks could be described as Antipodean mermaids – except for the fact that they are not benign. These fish-tailed maidens, young women Spirit Beings, with long flowing locks of hair comprised of green algae, live, or perhaps it would be more accurate to say ‘lurk’, in the deep waterholes, rockholes and freshwater streams of Western Arnhem Land in particular. Children and young people particularly fear them, because they are believed to be capable of dragging people underwater and drowning them.’ (Christine Nicholls, 2014)


You keep quiet now, little fella,
You want big-big Bunyip get you?
You look out, no good this place.
You see that waterhole over there?
He Gooboora, Silent Pool.
Suppose-it you go close up one time
Big fella woor, he wait there,
Big fella Bunyip sit down there,
In Silent Pool many bones down there.
He come up when it is dark,
He belong the big dark, that one.
Don’t go away from camp fire, you.
Better you curl up in the gunya,
Go to sleep now, little fella,
Tonight he hungry, hear him roar,
He frighten us, the terrible woor,
He the secret thing, he Fear,
He something we don’t know.
Go to sleep now, little fella,
Curl up with the yella dingo.
('The Bunyip', Oodgeroo Noonuccal, The Dawn is at Hand, 1992)

European Monsters
Aboriginal stories of the bunyip were new to European arrivals in Australia. They had left many of their own traditional figures of folklore back home, and so the new colonies had no fairies, banshees, goblins, pixies, leprechauns or werewolves. The Aboriginal cultural landscape contained its own kind of folkloric beings, many of which were misunderstood by the Europeans, but the bunyip soon became part of the imagination of White Australia.

Aboriginal parents understood the dangers of the landscape around them well enough, but the Europeans had a greater fear of what was (for them) an alien environment. The historical records give no real indication that 19th-century European adults took bunyip stories seriously (although they used the name as a generic term for mysterious and unidentified fauna of rivers and waterholes), but they did utilise the bunyip as a cautionary tale to try and stop their own children wandering off into the bush.


‘Everyone who has lived in Australia has heard of the bunyip. It is the one respectable flesh-curdling horror of which Australia can boast. The old world has her tales of ghoul and vampire, of Lorelei, spook and pixie, but Australia has... her Bunyip... the bushman will warm to his subject as readily as an Irishman to his banshee.’ (Rosa Campbell Praed, The Bunyip, 1891)

It is little surprise that Europeans picked up on the tales of waterhole monsters, as they had their own traditions of such creatures in their home countries. The Yawk Yawks described above are curiously similar to ‘Jenny Greenteeth’, a ‘waterhole spirit’ of my home county of Lancashire, England. Described as having green teeth (obviously) and sometimes green hair, these supernatural creatures were said to lurk in ponds and lakes and would use their long, sinewy arms to grab children who ventured too close to the water and then drag them in and drown them. Variations of the name include Jinny, Ginny and Jeannie.

‘Children of 19th-century Lancashire, children who reside in the country to be cautioned against venturing too near the water's brink, lest ‘Green Teeth’ or ‘Bloody Bones’ should pull them in. ‘Old Nick’ is said to lurk under the shady willows which overhang the deep water; and the bubbles of gas which may be observed escaping from the bottoms of quiet pools are attributed to the movements of the water-sprites which lurk beneath.’ (Lancashire Folk-lore, 1867, p.86)


Jenny herself is derived from earlier Scandinavian stories of the Nök (Norway) or Neck (Sweden and Finland). The Nök was said to require an annual human sacrifice, and anyone missing in the vicinity of the pond or river where this being lived was thought to have been seized and dragged under the water. The males preferred young women, while the females were said to be attractive to young fishermen. The Nix of Germany had much the same attributes. These creatures had large green teeth, and the male wore a green hat that could be mistaken by his victims for a tuft of vegetation. He was said to kill without mercy, and a fountain of blood spouting from the water indicated a killing.

Their names have been linked to ‘nymphs’, and also ‘Old Nick’, a colloquial term for Satan.


It seems somewhat perplexing that Aboriginal adults were often described in European writings as having a genuine fear of bunyips and similar creatures, especially given the vastly superior environmental understanding they possessed. There were, however, cultural parallels in the beliefs of many people in 19th-century Britain. Rural people of Lancashire clung very closely to centuries-old superstitions and folklore, and for them the local environment was filled with ‘boggarts’ and spirits that were held responsible for any number of minor or major mishaps. Something as simple as a cow having trouble producing milk could be attributed to supernatural forces. As Edwin Waugh wrote of people living in the countryside around my hometown of Heywood in 1855:


‘Whilst the sun was still up in the sky, they thought little about those numerous native boggarts, and "fairees," and "fleeorin'," which, according to local traditions and superstition, roam the woods, and waters, and lonely places; sometimes with the malevolent intent of luring into their toils any careless intruder upon their secluded domain. Some lurking in the streams and pools, like ‘Green-Teeth,’ and ‘Jenny Long Arms,’ waiting, with skinny claws and secret dart, for an opportunity to clutch the unwary wanderer upon the bank into the water.’ (Edwin Waugh, Sketches of Lancashire Life, 1855, p.204)

By the 19th century, the middle classes of England held these old beliefs to be somewhat 'quaint', in much the same way that many British people viewed similar Aboriginal stories. Despite this, these cautionary tales of lurking danger had a universal quality and found a place in the non-Indigenous mindset. The bunyip might not have been taken entirely seriously by the new arrivals, but it has evolved into an iconic part of modern Australian culture.