Should Ghost-Hunting Be Banned?

Straight from the top, I will say my answer to that question is 'yes'. But...

Not all ghost hunting, but specifically commercial ghost-hunting. The kind where customers are charged a lot of money by a self-proclaimed 'paranormal investigator' to take them around an allegedly 'haunted' place with electronic gadgets that are claimed to help them detect ghosts. 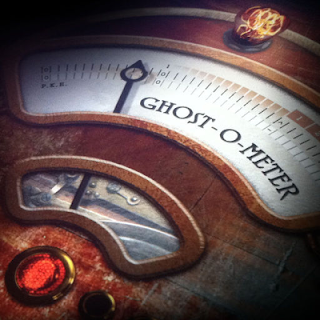 If you are part of a group that enjoys paranormal investigations out of personal interest and don't charge people to join you, that's a different thing. If you are using electronic equipment, I would dispute the science behind your methods, but it's your time and your money. Also, if your investigations focus more on the 'psychic' approach instead of using gadgets, that's something else again. The mediumship field is clearly open to all manner of fakes and charlatans, but my concern here is with selling the use of gadgets.

Here are the two basic reasons I would like to see commercial ghost-hunting banned.

1. Ghost-detecting gadgets are fake and you should never pay to use them
People are being charged a lot of money to use electronic devices that don't do what they are advertised to do.

Thanks to the advent of ghost-chasing 'Reality' TV shows, the electromagnetic field (EMF) detector has become the gadget of choice for many new ghost-hunting enthusiasts. EMF detectors actually do have a place in scientific examinations of the natural background environment of a place where paranormal-style activity has been alleged to occur. As academic researchers Tony Lawrence and Vic Tandy explained in this excellent paper:


'The ways in which normal earthly events might conspire to convey an impression that a house is haunted... are numerous. Thus, all of the following may well be the more mundane cause of an ostensible haunt; water hammer in pipes and radiators (noises), electrical faults (fires, phone calls, video problems), structural faults (draughts, cold spots, damp spots, noises), seismic activity (object movement/destruction, noises), electromagnetic anomalies (hallucinations), and exotic organic phenomena (rats scratching, beetles ticking). The exclusion of these counter-explanations, when potentially relevant, must be the first priority of the spontaneous cases investigator.' ('The Ghost in the Machine', Journal of the Society for Psychical Research, Vol.62, No. 851, April 1998)

Unfortunately, instead of taking an academic or scientific approach, it now seems to be common practice for ghost hunters to attribute unusual spikes in EMF readings to a supernatural presence. Commercial ghost hunts - which sell a 2-4 hour thrill-seeking experience as opposed to serious investigations - often use EMF detectors as ghostometers. One Brisbane business advertised their guides as using 'scientific paranormal investigative techniques to detect activity'. A guide on this hunt was filmed in a marketing video passing an EMF detector over a cemetery headstone and announcing he had probably just detected a ghost.


A variation on the EMF detector is the 'K-II Meter', the uselessness of which was amply demonstrated in experiments conducted by the Randi Educational Foundation.

These gadgets are real enough, but the use of them is completely misplaced and based on an unproven assumption that ghosts emit an 'energy' that can be detected and measured (to be fair, not all ghost hunters believe this). This implies a scientific understanding of what a 'ghost' is comprised of. Of course the mere existence of ghosts has not been proven in any way, so it follows that any theory as to what they are 'made of' is scientifically baseless. I recently wrote about the 'Haunting Australia' TV show, in which one ghost hunter claimed that ghosts 'have an amount of mass' that might be detected if they walked through his contraption, which looked something like a disco-light ball with a smoke machine. As you might expect, nothing was detected.

Other common gadgets include audio recorders for capturing 'electronic voice phenomena' (EVP). Ghost hunters have played these recordings for me in person (and there are plenty of examples on YouTube and TV), but in almost every case it is either explained to me first what the indistinct noise is about to say, or there are subtitles on related videos. The 'seed' of suggestion is planted in your mind, distorting the listening experience. In reality they are usually undecipherable noise - just try listening to one without someone else telling you what it says first.

The article 'Electronic Voice Phenomena: Voices of the Dead?' goes into better detail. EVP are also very easy to fake, and there seems to be industrial amounts of fraud going on judging by what is available online.

The big question is, it is ethical to to advertise these useless gadgets as being capable of 'detecting ghosts' and then charging customers money (sometimes well over $100 per head) to use them? Especially without a disclaimer explaining that these things don't actually work for the advertised purpose? In my opinion, it is hugely unethical.

The issue becomes more serious if the commercial ghost-hunt operator knows the gadgets do not do what they are advertised to. In that case, it looks like outright fraud. Of course, it is difficult for an outsider to know what the operators might really think about their products.

So, on the basis of selling the use of fake products alone, I think ghost hunting should be banned. There is, however, another valid reason to restrict them, one that applies equally to non-commercial investigations - respecting the dead and their surviving loved ones.

When it comes to the issue of respect, the line between appropriate and inappropriate venues for ghost hunts can be a fine one. Would you, for example, approve a ghost hunt at a place where someone you knew closely committed suicide? How about a house where a local family was recently killed in a fire? Or the murder site of Daniel Morcombe or any other child? What about Gallipoli? The Lady Cilento Children's Hospital?

If you have any sense of decency, the answers should be 'no'. Sometimes, however, it is not that clear cut. As ghost hunts tend to link alleged paranormal activity with the 'ghosts' (however defined) of specific people, the basic rule of thumb should be to ask yourself if the place has a special meaning to the loved ones of the deceased, and is it possible that your activities will upset them?

To begin with, I have an issue with 'identifying' ghosts. The process involves a sequence of related assumptions, each one requiring an irrational leap of logic in itself, and so the result gets increasingly unreliable with each step.
So the process of identifying a ghost as a specific person is in itself immensely illogical. But leaving that issue aside, is it even ethical to do so? If the alleged ghost is of a person who died a long time ago (say, over 100 years), it is not so much of an issue. But what if it was more recent, and relatives and friends of the dead would prefer to believe that their loved ones are resting in peace, and not some tortured soul forever wandering an old prison or cemetery? What if they don't want thrill-seekers wandering around 'hunting' the spirits of their loved ones?

The recent example of ghost hunts at Boggo Road has provided us with a good case study. The surviving heritage-listed prison buildings opened in 1903 and closed in 1989. A number of deaths happened in there during that time, due to natural causes, suicides, and - just off to one side of the eastern wall - a murder. Some deaths occurred as recently as the 1980s. These included Aboriginal men killing themselves in their cells. Some of these cases were examined as part of the 1987 'Royal Commission into Aboriginal Deaths in Custody'. The Commission decided that the material it had gathered should be made 'as publicly accessible as possible', but:


'...was aware that most of the material was less than 30 years old. It acknowledged that privacy and Aboriginal cultural sensitivities would need to be considered (eg it decided that the details of individual cases should not be released on the ground that they were too distressing to the deceased's family and friends).' [my emphasis]

The prison became a historical site in the mid-1990s, and when part of Boggo reopened on a short-term basis in 2012, the state government prohibited ghost hunts on the grounds that they were disrespectful and not relevant to historical interpretation. Unfortunately, the ghost hunt ban was overturned in 2014 by the Newman government. There was a public backlash and a petition (see the Courier-Mail's 'Stop this sick Boggo Road sideshow and leave those who died in that prison in peace') but the politician's decision stood. The hunts were only banned again after another change of government in early 2015.

I have written before about these Boggo ghost hunts, and I quoted a number of people who had contacted me. This statement came from a family member of someone who was murdered at the prison in the 1960s:


‘For years my family have been tormented with nonsense in the media and on the internet about my grandfather’s death. This was a traumatic event that affects all of us to this day. My own father wasn’t much more than a boy when Bernard was killed, and the sadness and struggle the family endured shaped the adults they became, and the children that they went on to have. The loss has been compounded in the years since by an awful man perpetuating stupid stories and rubbish about Bernard. He conducts tours and interviews focusing on my grandfather's supposed ghost... This man has even contacted me, as have a few ‘internet crazies’. It has all been very upsetting... They are also hurtful and distressing. And it makes me so angry that people are trying to make money by exploiting my family history. This man, Bernard Ralph, is still a very large part of some people’s lives.’

I also heard from relatives of deceased prisoners, as well as former officers and inmates themselves. People who lived with the reality of what death in the prison meant. The unanimous feeling was that the ghost hunts had to stop.

I'd argue that ghost hunting should not occur when it is likely to offend the loved ones of the deceased. This applies especially to commercial ghost hunts, where the intent is merely to make money. It applies even more especially in cases where those loved ones have asked you not to do it.

So in summary, I'd argue that commercial ghost hunts are an unethical rip-off because of the ridiculous equipment used, and all ghost hunts should be prohibited in places where they would be likely to upset the loved ones of the deceased.