Destroy All Your Books... Or Else: A Business Attacks a Historical Society 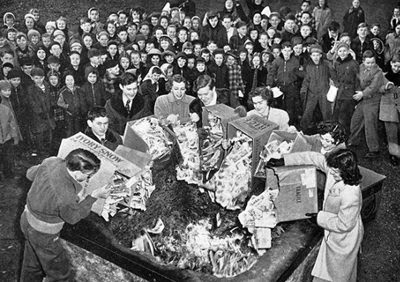 Imagine the volunteers in a respected History group receiving a legal letter from a small business owner demanding that they either destroy all their stock of self-published history books, or hand them over to him... or else he would drag the volunteers before the Supreme Court. Their alleged crime?

Having a similar domain name to the business, even though they actually had that domain name first.

Seems incredible, but this is exactly what happened to the Boggo Road Gaol Historical Society.

There have been references on this and other websites to legal threats made against the Boggo Road Gaol Historical Society by Cameron 'Jack' Sim of Brisbane-based 'Ghost Tours Pty Ltd'. The historical society was recently asked by someone what the threat was about, as it had never been explained anywhere publicly. So here it is.

The overall situation, put as matter-of-factly as possible, is this:

The pensioner volunteers who ran Boggo Road circa 1999-2004 did so (for legal requirements) as a not-for-profit entity called the Boggo Road Gaol Museum Association. Around 1999/2000 they established a museum website with the domain name ‘boggoroadgaol.com.au’.

Following retirements and deaths, the BRGM Association was wound down circa 2004 and assets were transferred to the not-for-profit Boggo Road Gaol Historical Society, including the domain name (although there was a clerical delay in transferring registration of that domain).

A couple of years later the BRGHS finally updated the old boggoroadgaol.com.au website with new information about their group, including not-for-profit publications and proposed tours of Boggo Road (a place which at that time had been closed for a few years years).

This drew the attention of ‘Jack’ Sim who had recently begun using a website with the domain ‘boggoroadgaol.com’ (his previous website was boggoroadjail.com.au) and had registered a trademark logo which - among other things - happened to contain the words 'Boggo Road Gaol' and his new domain address.

What happened next should be a teachable moment for volunteers and community groups around Queensland. Sim sent out two lengthy and probably expensive legal threats, one to the historical society and one to retired volunteer and Boggo Road legend John Banks, claiming that the Boggo Road Gaol Historical Society had infringed his trademark and had adopted the mark ‘BoggoRoadGoal’ [sic] with (and I quote);

‘the deliberate object of causing confusion and deception’.

A very serious accusation indeed. In his mind, the historical society - which predated his Boggo Road business - was deliberately 'passing itself off' as that business simply because the volunteers were engaged in all the usual historical society activities (research, publishing and tours) and had a domain name that had been used by Boggo Road volunteers since 1999/2000 - years before his business was even established.

Sim then made the following demands: 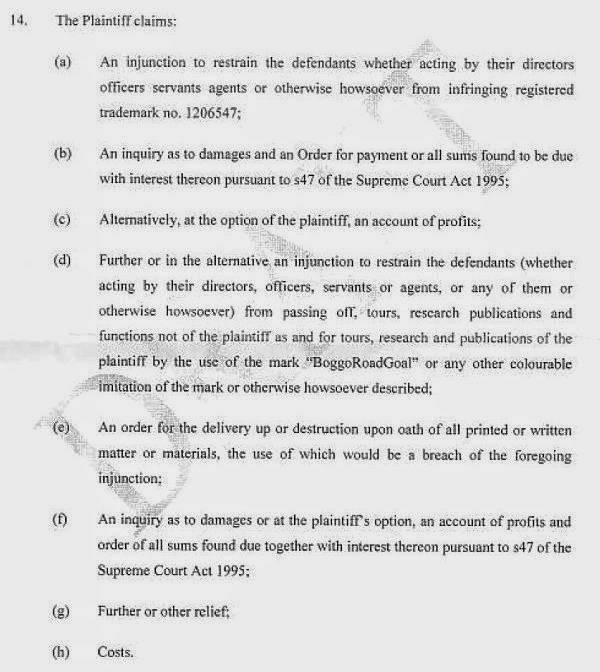 In a nutshell, he had demanded that the volunteers of the historical society:

If the volunteers had agreed to these demands, their historical society would have closed down. The group had about 40 members at the time (nearly 200 now) and the old prison - the raison d'être for the historical society's existence - had been closed for three years. The group was surviving thanks to the sales of the books they wrote and printed, but printing books is an expensive exercise and costs are only recouped by selling them. The demand that the volunteers destroy their existing stock and pay what could have been thousands of dollars in costs would have left the historical society with no saleable product and no money for new stock or even paying their annual four-figure overheads (such as insurance). It would have been the end of their organisation.

Fortunately the volunteers had access to some quality legal advice and the verdict was one of astonishment and amusement at the general absurdity of the threat, which they already guessed was baseless and misinformed anyway. The volunteers ignored the threat and so a follow-up threat arrived in the postbox on Christmas Eve. Not actually seen until a few weeks later, this second letter was also ignored.

Historical society volunteers met with Sim a couple of months later, He let it be known that the threat could be forgotten about if they signed off on his plan for running Boggo Road. A plan he then placed on the table. Not only did the historical society reject the ‘offer’ outright, they made it clear that they would not even discuss working with him until the threat was withdrawn. He refused to do so.

The logic behind the volunteers’ thinking is obvious. They are simply not willing to work for the financial benefit of any commercial entity that was threatening to sue and possibly close their group down. They would not not undertake unpaid volunteer work to help fund possible legal action against themselves.

The subject came up at a more recent meeting between historical society volunteers, government officials and Sim himself. He initially denied having made the threat, but when the actual legal letters were immediately produced he verbally repeated the threat! He was challenged by the volunteers to follow through with his threat, but has refused to do so.

And there it stands. The question as to whether or not this threat of legal action has been withdrawn or carried out pops up occasionally at historical society meetings. The answer either way remains ‘no’. It seems to be an inconvenient truth for some governmental officials, but for the volunteers of the Boggo Road Gaol Historical Society it is a matter of principle. They will not reward threats from small businessmen and will not associate themselves with the type of person who can behave in such a way.

Prior to all this happening the historical society had held out an olive branch to Ghost Tours - in writing - recognising that the best route towards a peaceful future for Boggo Road was for us to work together. We received no reply. Unfortunately the legal threats made by Sim proved to be an obstacle to peace at Boggo Road. It is not insurmountable, but remains an issue.

What needs to be remembered is that when Boggo Road finally moves into a better future, there will be plenty of arts and history organisations lining up to bring the old prison back to life for the public. This is exactly what is needed, because a lot of different people had very different experiences of life inside that prison and so the many stories of Boggo Road should be told in many voices and many ways.

And they should be allowed to do so in an atmosphere free of the kind of threats and bullying such as the one described above.


* This has been abridged from an article originally published in October 2014.