The Bromelton Bunyip of Beaudesert 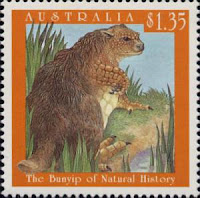 The idea of the ‘bunyip’ as a mysterious and possibly mythical water creature was well established in non-Indigenous Australian lore by the time the Moreton Bay Penal Settlement closed in 1842. For several decades there had been sporadic accounts of strange unidentified freshwater animals across the country, which were first named in print as ‘bunyips’ in the Geelong Advertiser in 1845. Not long afterwards, the new arrivals moving into the unfamiliar Aboriginal lands surrounding Brisbane provided the first local non-Indigenous reports of ‘bunyip’ sightings.

The first recorded sighting of a bunyip in Queensland took place in 1850, on the 'Bromelton' property of Thomas Murray-Prior, by the Logan River near Beaudesert. This was the first run to be taken up anywhere on the Logan River. The Aboriginal name for this place was Bungropin, reportedly meaning ‘the place of parrots’, after the great flocks of parrots that used to frequent the area.

One of the dominant features of this property was a large and deep lagoon, which according to Aboriginal legend was dug by a platypus escaping from a dingo. The lagoon is about 1.5 km in circumference and up 30 metres deep. Local Aboriginal people believed that a tunnel connected this waterhole to a smaller lagoon called Ilbogan.


There was a report in the Moreton Bay Courier in 1850 about a sighting of a strange creature on the Bromelton property. A woman staying at the house (possibly a sister of Murray-Prior's wife Matilda Harpur) claimed to have seen a ‘living animal of extraordinary shape and dimensions’ while she was walking near a large lagoon there. She provided this vivid description:


‘The head appeared to be elongated and flattened, like the bill of a platypus. The body, from the place where it joined the head, to about five feet backward, seemed like that of a gigantic eel, being of about the ordinary thickness of a man's body. Beyond this it was of much larger apparent size, having the appearance of being coiled into innumerable folds. Beyond those coils was what seemed to be the tail of the animal, which had somewhat the shape of the tail of a fish, but is described as having the semi-transparent appearance of a bladder. The head, which was small and narrow in proportion to the size of the body, was furnished with what seemed to be two horns, which were quite white. Under the circumstances it was, of course, difficult to judge accurately of the whole length of the animal, but, by comparison with other objects, it is supposed that the parts visible above the water must have been thirty feet in extent.’ (Moreton Bay Courier, 9 February 1850)

She quickly left the scene before returning with two other women, but all that was visible of the creature (for a short time before it disappeared underwater) was a tail.


‘… it appears that this lagoon has long enjoyed the reputation of being the home of a monster answering the above imperfect description, and which is stated to have been seen more than once by men on the station. It is certain that the aboriginal natives will not bathe in the lagoon, and that they have evinced much fear of something that they believe to be an inhabitant of its waters… There is… ‘ample space and verge enough’ for more than one of these huge denizens of the still waters to live in retirement. Whatever may be the natural character and attributes of this extraordinary animal, we have some hopes of their being shortly made known, for we are informed that a regular crusade is being organized against it, and every preparation made to secure it, if possible, dead or alive. We shall not fail to lay before our readers any further particulars that may be gathered upon this interesting subject.’

This last paragraph demonstrates one of the key aspects of colonial attitudes to the bunyip. While the creature was attributed with supernatural qualities within Aboriginal cultures, many Europeans viewed it as yet-to-be-identified fauna. To the new arrivals, this was still a new landscape filled with exotic fauna and untold zoological possibilities. Several decades were to pass before white Australia relegated the bunyip to the status of mere folklore.


In fact, one of the authors responsible for popularising the bunyip within folklore was the novelist Rosa Campbell Praed. Thomas Murray-Prior was her father, Bromelton had been her childhood home, and it was her aunt who had reportedly witnessed the bunyip back in 1850. No doubt influenced by these connections, Rosa wrote a short story titled ‘The Bunyip’ in 1891 (it can be read here).

It would seem that despite the extraordinary description given of the creature in 1850, it was never seen again - certainly not by any westerner, anyway. It is difficult to know what to make of this report. Most bunyip sightings of the following century seemed to be the result of people misidentifying seals, eels, crocodiles and even ducks, and while the most likely suspect in the 1850 account would be a giant eel, the overall description is still quite fantastic. Could the witness have been influenced by the subtropical summer heat? Whatever it was, the Bromelton Bunyip entered into local legend and almost 80 years later an article about a nearby racecourse carried this reminder:


‘Many years ago this lagoon provided excellent sport for the enthusiastic fisher map, mullet and perch in plenty being readily obtainable. Although its submerged snags were well known, it was, nevertheless, an extremely popular bathing place. This fact recalls an incident when a huge serpent-like water monster was alleged to have been seen, by a party of bathers, whose statement was, at a later period, corroborated by a party of aboriginals who were in the habit of camping at the lagoon, and who claimed to have seen this monster sporting about in the water. The blacks described it as a "big fella bunyip," or "debil debil," and thereafter it was familiarly known as the Ilbogan bunyip. Firm in their belief that the lagoon was haunted, the aboriginals were loathe to approach its precincts for a considerable period there-after; in fact, the alleged presence of the monster had the effect of dampening the ardour of all who were in the habit of enjoying a customary week-end dip.’ (Brisbane Courier, 11 May 1927)