The Burleigh and Bilinga Sperm Whales

On the hot afternoon of 27 December 1926, hundreds of holiday-makers on the main surfing beach at Burleigh Heads, Gold Coast, were horrified to see a massive white object floating out in the ocean. Most of the onlookers presumed that it was an overturned boat. The Southport police were quickly called to investigate, and they discovered that the object was in fact a dead 24-metre Sperm Whale. 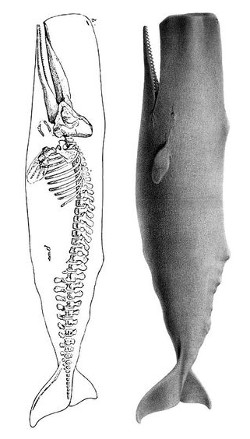 By evening time the whale had drifted in to shore and was stuck hard and fast on the beachside rocks. News of this spectacular sight spread fast, and during the following morning thousands of people from the neighbouring holiday resorts of Southport, Coolangatta and the Tweed arrived to watch as a gang of men employed by the shire council began the process of trying to dispose of the carcass. The whale had also attracted a great number of sharks which were engaged in eating it.

Although the sharks kept the waters free of bathers, a number of surfers refused to be deterred by the danger and even ignored warning blasts.

Progress in chopping the whale into smaller pieces was slow, and the workmen reportedly found that 'trying to chop blubber is just like trying to chop rubber.' There were at times as many as 100 men working on the body, and an attempt to burn it was unsuccessful, as was an effort to tow the carcass out to sea.

The ongoing decomposition created an awful stench in the local area that reportedly caused 'much alarm to residents in the vicinity' and drove nearby campers from their campsites. On 31 December a large crowd gathered on the shore to watch what promised to be a New Year's Eve show with a difference when 30 plugs of gelignite were inserted into the carcass in an attempt to speed up the cutting process. The spectators had been expecting something of a spectacular explosion, and were reportedly disappointed when the big moment resulted in no more than a dull thud and a low geyser of oil shooting into the air.


Despite the low-key detonations, it was now easier to butcher the body. In preparation, a large grave was excavated several chains from the beach, to the objection of some local residents but the satisfaction of the council health inspector. The pit measured 10 metres long, 6 metres wide, and 4 metres deep. Steel cables were placed around the carcass and attached to two 2.5-ton trucks. With the help of skids and a double block and tackle, the remains of the whale were rolled up the beach to the point of burial.

There was a bit more drama a few days later when two massive jaw-bones were recovered from the surf near the site of the stranded whale. They were over 5 metres long and about 1.6 metres thick, with 12 giant teeth on each side. It was speculated that they must have belonged to some 'marine monster' which had fought with the whale and been killed, but Heber Longman, director of the Queensland Museum, arrived to identify them as the jaw bones of the Sperm Whales, and had obviously become dislodged during the efforts to destroy the carcass. The jaws were donated to the Queensland Museum and within 12 months were on display in their 'Mammalian Court'.

A week after the burial of the whale, a poem on the subject appeared in the Brisbane Courier:

BURLEIGH! Burleigh!
Sour and surly,
You're ungrateful,
Which is hateful!
Neptune sent you,
To content you,
From his restive
Fold a festive
Gift, at Christmas!
That grey, triste mass
Reached you early,
Thankless Burleigh!
Worth much MONEY,
But you're funny,
That great drift-whale,
That rich gift-whale,
You, complaining
And restraining,
YOU would ignite -
Used gelignite!
Tried to blow-up
What a show-up!
Santa Claus will now turn surly -
"No more Christmas gifts for Burleigh!"

13 years later a similar-sized Sperm Whale washed up at Bilinga, just south of Burleigh Heads. This one had apparently been dead for several months and was badly ravaged by sharks. 10,000 sightseers were reported to have visited the scene, which was great for local tourism businesses. The Bilinga Surf Club even organised a 'community beach concert' only 50 metres away from the whale. However, the stench soon became overpowering and the whale had to be removed. Council workers cut up the carcass with knives and axes, and the pieces were towed up the beach by tractor for burial. The whole process took five days. Once again the Queensland Museum requested the jaw bones.