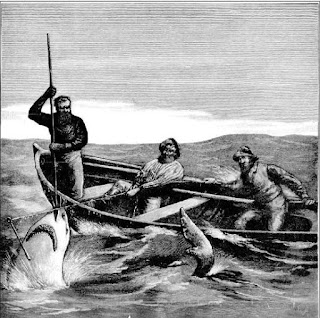 The following vivid account of the capture of a huge shark at Cooktown in 1878 is taken from the Western Champion, 1922:

'In the early days of Cooktown a couple of old "whalers" had established a sort of boiling-down business, at the foot of Grassy Hill, in a bight from which road material had been excavated, and in 1878 made a good return in catching sharks and boiling the livers for oil. They also treated the dugong brought from outside the same way. These sharks went from four to seven or eight feet; the larger the beast the greater and more profitable quantity of oil, of course.

In August it was noised abroad that there was an exceedingly large shark in the harbor, playing the deuce with the fish; and the fishermen (Chinese) evidently scared out of their senses, swore in best Tartar and with many gesticulations, that the monster would rise along side their boats and open his cavernous jaws, and showing a frightful double row of teeth threaten to crunch up a boat, but the fishermen aided by fear, vigorously pulled their oars and made for the shallow water.

To secure the monster was a haul worth while, so the two "whalers" set about catching her - for the saurian turned out to be a female. The shark was seen hovering about the wharves at high tide probably looking after the dainties thrown overboard from, the steamers. Anyway a large hook, about an inch in thickness at the bend - was well baited with a high-smelling leg of beef, and a ship's hawser was attached to a heavy ring welded at the end of the hook. It was the ring off an old anchor, I think, while the hook itself  was taken from some old sailer, probably the fastening of a chain used to lift cargo. The end of the hawser was knotted round one of. the large posts to which vessels were moored and was placed a few yards on the town side from Hendiques little wharf.

The operations were completed on Saturday afternoon; I remember it well as the coastal boat had just gone out. The tide receded and came in again, no shark. How anxiously those two men watched through the night! Men (sailors mostly) would saunter down from Weir's pub., a couple of hundred yards away, up the street, and keep the two comrades company enjoying a pipe and a yarn at the same time.

Daylight broke - a beautiful Sunday morning - and the tide was dead out. At about nine o'clock I was sitting on my verandah over looking the harbor. In front was the road leading to No. 1 wharf, and the Pilot shed and Ben Palmer's house round the point; on the pebbly foreshore to the left of the little wharf were a knot of men doubtless discussing the situation; the hawser hung loosely on the strand. But suddenly there was a cry, "We've got him!" and in an instant the excitement over the relief of Ladysmith was trivial as compared with the excitement of the moment. The hawser had become tight, and the strain was intense. The huge post was bending and the two men called out to the assembled crowd for help. I ran down to do my bit, and soon commenced one of the toughest tugs of war in history. There were about 20 men pulling and tugging at that hawser against one - but what was that one? We shall see presently.

The surface of the water was covered with streaks of blood and foam, but the unequal fight continued for - it seemed an hour, but was probably 16 minutes. I remember we did not gain much rope. Then suddenly the strain relaxed, and we all went down like ninepins. It was thought the monster, scenting the high dish prepared for her and being like Eve unable to resist temptation, came too far in on the ebb tide, swallowed the bait, and became partially stranded. But she put up a brave fight for her life until exhausted. The tide was rising quickly so we would have to hurry up if we intended loading our quarry. It was a tough job but we eventually got her ashore high and dry. The beast was far from
being dead. Her eyes, as large as saucers, looked horrible; they glared at us with a seemingly intense hatred; continually opened and shut her immense jaws - about three feet or so, while she lashed her tail, each smack on the earth sounding like a clap of thunder, while she roared like a lion. The hook was caught in the lower jaw, and as we subsequently noted was bent nearly straight; while the hawser at the ring was halt frayed through- The whalers said that had there been a drop more water the shark would have got away.

A stick was poked between the shark's jaws and the two whalers, soon gave her her quietus. By this time the water laved the side of the saurian. She was measured and from point to point overall, went eighteen feet - a record shark for the time. It was supposed to have come from the Barrier, where it was reported there were some monster sharks. (Archie Meston, I notice, confirms this). The shark was opened, when out came a number of small sharks from a foot to eighteen inches in length. They were funny looking things like huge tadpoles, with rudimentary tails. Like lightning they wriggled into the water, and in a second were lost to view. We had scarcely a moment to look at them. It was quicker than some of the reading descriptive of a picture at a cinema show. One or two people made a dive to catch one, but instead of the substance they got the shadow. Opinions differed as to the number of youngsters - some said 18 others 19. So old Mrs. Saurian left plenty of progeny behind her; she was evidently just about to spawn.

"Old French Charlie" paid £5 for the jaws, which afterwards formed the unique frame of a pier glass, and unless he sent it to France may probably be seen in the old hotel to this day. The liver was a monster, and yielded £50 worth of oil. All day Sunday the shark held a levee, but was of such bulk that no time had to be lost after sundown in chopping it up and removing it into deep water.

Since then, Cooktown district boasts of having discovered the biggest snake, but that is another story.'