Did you know that Victorian-era Brisbane had a resort that was Dreamworld, Seaworld and Movie World all rolled into one quaint 19th-century package?

It was the 1890s, a decade before the advent of cinema, and the citizens of Brisbane loved to get out and about for their family entertainment, heading to parks, theatres, forests, museums, the coast, and anywhere the public transport of the day could get them. If they took the steam ferry from Petrie's Bight, near Customs House, they could visit the Queensport Aquarium and Zoological Garden.

The Queensport Aquarium, in the Brisbane riverside suburb of Hemmant, opened to much fanfare on 7 August 1889. Public aquariums had been hugely popular in England since the 1850s (following the abolition of a tax on glass!), allowing the British public to see fish other than kippers for the first time. Most seaside resorts had (and still have) an aquarium building, and the craze took off here in Australia too.

Queensport was more than just a simple aquarium, however, it was a whole resort in itself. Set in eleven acres of landscaped grounds, the centrepiece was a two-storey aquarium with six fish tanks, each one measuring 13 feet long, 4 feet wide and 5 feet deep. Other attractions included a seal pond, a small zoo, fairground rides, a fernery, fountains, and a 1,400-seat concert hall and stage, complete with plush curtains and electric organ, that was the venue for concerts, theatre and opera. There was also a sports field that was mostly used for cricket and picnics, and the grounds were illuminated by new-fangled electric lights.

Where modern theme parks often have 3D movie screenings, the aquarium had its 19th-century equivalent in the ‘camera obscura’, a primitive optical device in a darkened space that projects a picture of the surrounds onto a screen (see how it works here). At the time, this was considered to be special effects entertainment.


Apart from the fish and seals, other animal attractions were monkeys, apes, snakes, emus, panthers, cheetahs, and tigers named Jimmy, Sammy, Sir Roger and Dina. This menagerie had belonged to Charles Higgins, who had previously kept them at Toombul and also in a flimsy enclosure on the corner of George and Turbot Street in the city in 1888. Needless to say, this all ended badly when one of the tigers escaped and savagely mauled a man, exposing his brain. A newspaper account printed the understatement of the year when it described passers-by being "startled" by the sight of an enormous man-eating Bengal tiger actually trying to eat a man in George Street, and unsurprisingly everybody "hurriedly left the vicinity" (I would think replacing "startled" with "pant-shittingly terrified", and "hurriedly left the vicinity" with "running screaming for their lives", would probably be a more accurate description of what happened). The eventual move to safer cages at Queensport was no doubt heartily welcomed by everyone in Brisbane.*

The Queensport venture was initially a huge success, with the public flocking to the aquarium in their thousands. On the biggest days, such as Easter Monday and Boxing Day, steamers full of happy day-trippers would leave the company’s wharf at Petrie’s Bight every half-hour. The owners worked hard to get the public in, providing an array of other novelties in including the ‘Electric Orchestrion’ machine, rifle-shooting and archery exhibitions, Punch and Judy shows, minstrel shows, pedestal dancing, and moonlight trips on the steamers Woolwich and Natone. 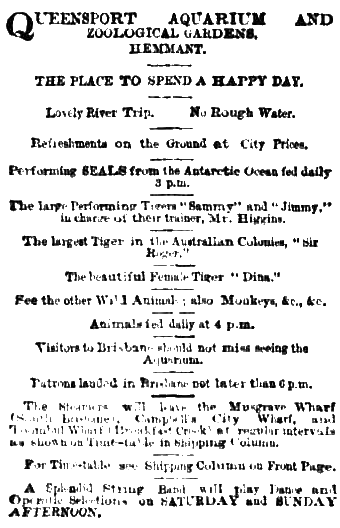 One notable visitor was ‘Professor’ Christopher Fernandez, a travelling aeronaut whose specialty was ascending half a mile in a hot air balloon, setting off fireworks, and then parachuting back down to the ground. However, not all went according to plan during his appearance at the aquarium in May 1891, when his balloon failed to reach sufficient height and came down on nearby Gibson Island, where the good professor found himself bogged knee-deep in mud. A promised relaunch never happened due to bad weather, although Fernandez did successfully pull off the stunt at other venues around Australia.

Like most 19th-century riverside structures, the aquarium was subject to occasional damage by the Brisbane River. The big floods of 1890 and 1893 caused considerable damage, as did a gale in March 1892 that blew the switchback railway and several empty tiger cages into the river. Events like these would have added to what must have been considerable costs in maintaining the place, and although the owners soldiered on, the aquarium seems to have become much less popular by the mid-1890s. This demise is not well documented, but in late 1897 most of the content and structures were advertised for sale, including all the remaining animals and their housing. The pavilion and sports grounds stayed in place, however, and still attracted large picnic groups for a few more years. In 1900 the land was actually considered as the site for what later became the Princess Alexandra Hospital, and the pavilion was sold in 1901 prior to the land being subdivided.


The suburbs of Brisbane would never really see anything like the Queensport Aquarium and Zoological Garden again.

* The tiger's victim was an Austrian man named Peter Bertram, who survived the attack. A couple of years later he was charged with murder, and so would have spent time in Boggo Road prison on remand.