'They Don't Know What Death Is': Ghost Hunting at a Suicide Scene

WARNING: The following article contains details relating to the death of an Aboriginal man in custody at Boggo Road prison in the 1980s. 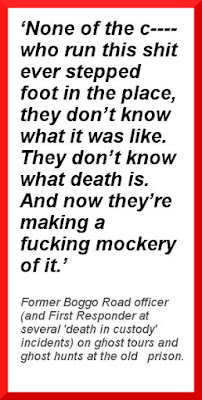 Brisbane's Boggo Road Gaol has been home to a number of cheap and tawdry events in recent times, including ghost hunts, ghost tours and even parties with a 'haunted house'.* I've explained the incredibly disrespectful aspect of these 'hunts' before. In short, people have died in terrible circumstances in the Boggo Road cellblocks, and well within living memory. Those people have living relatives and friends whose dearest wish is for the dead to be left alone to rest in peace.

Unfortunately, there are some in the paranormal industry who refuse to let a bit of common decency stand between themselves and a dollar, and so they dismiss the concerns of the deceased person's loved ones. This is the case at Boggo Road Gaol, and this is why the Queensland Government had to step in and ban 'ghost hunts' there.

One of the most powerful statements against the immaturity of the paranormal industry came from an ex-officer, long since retired, who carries with him the vivid memories of being a 'first responder' to suicide and murder scenes inside the old prison. He, and several other officers, have described to me in detail the experience of coming across a dead body inside a cell, the sight and smell of it, and how it stays with you.


'They don't know what death is', he told me when he heard about 'ghost hunts', 'And now they're making a fucking mockery of it'. 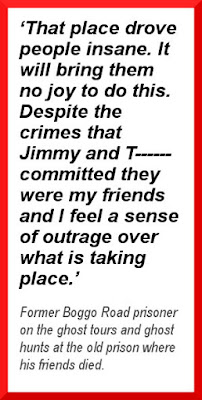 I don't personally class any one type of death in custody as being worse than another, but the insensitivity of commercial ghost hunts at Boggo is particularly highlighted by Indigenous deaths there, which have been the subject of major reports in the past.

One of these was the 'Royal Commission Into Aboriginal Deaths In Custody', which took place during 1987-91 and investigated the deaths of 99 Aboriginal prisoners around Australia during previous years. These included cases at Boggo Road. The report went into great depth on the background stories of the individuals concerned, looking at the life circumstances that led to their eventual incarceration and death. Most of the material is now available online at this website. In some cases the names of some deceased persons are not included, in accordance with Indigenous customs.

The following text is an extract from the report on an unnamed man who died inside the F Wing of Boggo Road in December 1980. It is taken from the Royal Commission Into Aboriginal Deaths In Custody website and describes his final night and the circumstances in which he was found the next day. As I warned before, it does contain some explicit details.


The Man Who Died in Brisbane Prison on 4 December 1980: Events That Occurred in Custody

...While he was on remand the deceased received visits from three of his sisters and a brother and mail from his mother. During the visits by family members the deceased did not discuss the charges against him or at any stage profess his innocence. He did not complain of any harassment or ill-treatment from police, prison officers or other prisoners, or request any medication or assistance. Similarly, at no stage did he give any indication that he might attempt to kill himself.

At 4.30 pm on 4 December 1980, Prison Officer Jack Krikorian escorted the deceased and five other prisoners from 7 Yard to F Wing. He then placed the six prisoners in their respective cells and locked them up. When he locked the deceased in cell 4 Krikorian noticed nothing unusual about his manner. According to Krikorian the deceased did not appear to be depressed. He was then left alone in his cell.

At about 10.00 pm that evening, a prisoner, Christopher William Hudson, who was in cell 2, which adjoined that of the deceased, heard gurgling sounds coming from the deceased's cell. There is no evidence that Hudson attempted to draw anyone's attention to what he heard.

At 6.05 am on 5 December 1980, Prison Officer John Robert Adam, who was performing duty in F Wing, began to release the prisoners from their cells and noticed that the deceased did not come out of his cell.

Adam went to the cell and found that the bed had been pushed against the door. When he gained entry he saw the body of the deceased hanging from the bars of the cell window by a rope made from strips of sheet material twisted together. It was in a noose around his neck and tied to the last two bars of the cell window. Adam tried to find a pulse but without success. The position of the deceased's body was consistent with his having jumped from the bed with the noose tied firmly.

At about 6.07 am Chief Prison Officer Frederick Henry Colebourne was advised by 1/C Prison Officer Phillip Anthony Latimer that a body had been found hanging in F Wing. He directed Latimer to assist in lowering the body and he contacted Prison Officer William Ronald Martin, a medical orderly at the prison hospital. He asked Martin to attend at F Wing.

On his arrival at Cell 4 Colebourne observed:

'Senior Prison Officer Collins and I/C Prison Officer Latimer in the process of lowering the body of a person from a position at the rear of the cell, onto a bed; the body appeared to be stiff and my observations at this time would lead me to believe that the death had occurred some considerable time before the body was discovered. The body of the person, now known to me as [deceased 's name] was examined by Prison Officer Medical Orderly, Mr R. Martin.'

Martin went to F Wing and entered cell 4 where he saw the body of the deceased on the bed with the rope of sheeting tightly knotted around the neck. Martin felt for signs of life but the body was cold and stiff. He notified the hospital to inform the Government Medical Officer, Dr Kenneth John Morrison, and then instructed the Senior Prison Officer Neville Raymond Collins to lock the cell door until the doctor arrived.

At 7.20 am Dr Morrison arrived and examined the body. He noted in the deceased's prison medical record: '... Deep ligature mark. Knot on right side. No petechiae noted. Face swollen. Cold. Life extinct ... '. Dr Morrison told investigating police officer, Constable Jeffrey Gordon Thorpe, that in his opinion death had occurred at about 10.30 pm on 4 December 1980.

One important point I have made in the past is that people like this died while in the custody of the Queensland Government, and inside a government facility. That is why I felt it particularly inappropriate that the Queensland Government gave the go-ahead for commercial 'ghost hunts' to take place there in 2014 and, by means of rents charged, draw indirect income from them. Fortunately a change of government led to a change of heart and the ghost hunts have since been stopped.

I have published the report extract above because F Wing has been used for commercial ghost hunts in which people pay to use bogus equipment to 'hunt ghosts'. It shows that beyond the corny schlock-horror approach to ghost tours in places like this, these incidents involved real people.

I have already requested that a refurbished Boggo Road historical site feature some culturally-appropriate marker of respect and remembrance for all those who died and suffered within the walls of the old prison. They should be allowed to rest in peace.