The Strange Case of the Brisbane River Monster

If the following newspaper account is anything to go by, then in 1898 the residents of the small town of Lowood, 66km west of Brisbane, were in the grip of 'monster fever'. 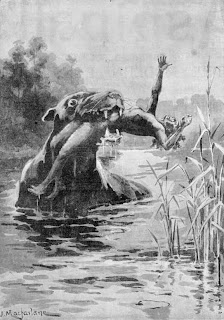 Situated by the upper reaches of the Brisbane River, this was a quiet, remote spot with dairy farms and a strong German community. During 1898 there were a number of strange occurrences and alleged sightings of some kind of large creature in the river there. Some claimed it be a crocodile, others a massive dog with tusks, and others said it had wings or fins. The name 'bunyip' was also used, linking it to a large creature from Aboriginal mythology.

There were even reports of the creature leaving the waters at night to walk on land and attack cattle!

The situation came to a head in August 1898, and the Brisbane Courier presented this account of the extraordinary events at Lowood:

"Reported Monster in the Brisbane River. (From our Lowood Correspondent.)


Ever since last flood, rumours have been prevalent that there was some animal of the alligator species in the river here. Several fishing parties have reported being disturbed by the appearance of the monster, demon, or whatever it was, which scared the piscators so much that they retired in much haste and trepidation.

Others have said that the animal was seen to come out of the river at night and attack cattle grazing on the bank. One report was to the effect that a calf was, on one occasion, carried bodily into the water and devoured. The monster was described by some who saw it as being something similar to a Newfoundland dog with a ferocious head and large tusks. Others affirmed that it had wings or large fins and yet resembled an alligator in its motions when on dry land.

If it could only be located it was the determination of numerous residents to destroy the brute. When seen, however, no fire-arms were in the hands of the surprised beholders. Last Thursday night, a party of 'opossum-shooters when near the river were surprised to see the monster floating in the river, and only too glad of the opportunity of distinguishing themselves by clearing the river of the "devourer," they fired ten shots which did not prevent the "bunyip" from speeding away up the river to the long waterhole opposite Lindermann's cultivation.

The monster having thus been located the night of Friday last was fixed for a party to effect its destruction. The appointment was made for 5 p.m., and the "vigilance committee" were to assemble at the Lowood School of Arts. About twenty of the residents (armed with guns), together with Constable Fagg and others, accordingly met at the "trysting-place" and determined to get to the scene of action with as little delay as possible. A move was accordingly made to the bottom of Mr. Lindermann's paddock on the river bank, and, after the party had traversed the bank some half hour or so, one of the scouts reported seeing a dark moving object on the other side of the river on a large log. The object had scarcely been noted when it jumped or dived off the log with considerable noise and splashing, and came towards the party bent upon its destruction.

As it rapidly and fearlessly approached, some who were rather timid were for firing and scaring the monster off, but the leader of the party counselled them to reserve their fire until a nearer approach of the creature. The right time having arrived the order was given, and a volley from the party was fired at the approaching object. Another volley was next poured in, with shots at intervals of a few minutes until the advance of the monster was stayed and the body seemed to float away up the stream.

The firing brought quite a crowd of the principal residents on the scene, and a boat was soon manned to follow the carcase of the supposed dead bunyip. The party in the boat on nearing the unknown, fired once more, and then secured the floating body. Loud cries of "Have ye got him?" "Is he dead?" "Get him to land?" &amp;c. were directed to the party in the boat who were hauling aboard the river monster. It was soon found to the disgust of the slayers, that the bunyip wore make up. The skin of a wallaby had been stuffed over an empty wooden case and an ingenious arrangement of cords fixed so that the "demon" could be pulled through the water. This was rather a "sell" for many persons who thought that "behemoth" was genuine, and the affair has caused a lot of fun.


"The excitement and amusement created by the bunyip hoax on Friday have not yet subsided and the sayings of those who were determined to capture the monster cause no end of merriment. There were about ten men of K company present with forty rounds of ball cartridges and about twenty of the young men round here (seven with shot guns), while others (on hearing the first volley fired at the river) made haste to the scene of action, bent on having a view of the leviathan.

The excitement was intense. The independent firing continued until the halliards or ropes attached to the "creature" were cut and then the boat was manned and the shooters made towards the supposed dying bunyip. On their near approach, however, the remaining rope was pulled by the unseen operator and the crew of the boat paused, some saying, "Look out! don't let us get too close, for we do not know what he may do." A hurried consultation resulted in their deciding to let the monster have another volley to make quite sure.

The deed was done and the boatsmen then got near the object of their pursuit and pulled it on board, when they were surprised to find that lately "terrible monster" was, as one remarked, "only a b——y box !" Those who had before held back, being rather afraid, now, on hearing that the "monster" was dead, drew near to the boats and the surprise of the assembled crowd was very amusing.

The "bunyip" was on view at the Lowood Railway Station yesterday. It is about 5ft. long (tail included) with a head like that of a good sized calf, covered with swanskin, black leather being over its nose. The tail was made of swanskin and grey wallaby skin, and the ears of wallaby skin, with wire appliances to keep the ears stiff. The "body" was simply an old wooden case. At the railway station, on the arrival of the trains, a general move of the passengers was made to view the "bunyip," and it is the talk of the whole district.

Some say that one resident of the Pocket had offered £40 for the capture of the monster that was reported to be seen in the river some months ago, when the calves were being missed. A report was also rife that the Government were willing to give £200 for the monster, for the Museum, and there were several disputes, before the finale as to how these rewards were to be shared by the armed and unarmed hunters of "the River Terror." Nothing in the hoax line that has happened here has caused so much laughter for many a year."

So it was after all an elaborate hoax, and one worthy of any modern-day monster or ghost prankster. This detailed account of the details behind the events appeared in 1940:


'When fuller investigation was made it was found that the leader of the volley party, Mr. C.H.D. Lindemann, was the perpetrator. The bunyip was a box covered with wallaby hide, with swansdown ears and sole leather sewn on for its nose. It was made by Messrs. Lindemann and K. Smythe, Mr. Smythe being a bootmaker. The only other person in the joke, apart from those operating the device was the police sergeant at Lowood. The "bunyip" was fastened to a wire across the river, on an angle, and was worked by a device and pulleys by Mr. F. Smythe behind a gum tree on Vernor's side and by Mr. Jack Lindemann on the Lowood side. The men working the pulleys were high up on the bank and out of harm's way. Mr. Arthur Nunn also knew a good deal of the arrangements. The "bunyip" was brought to Lowood and lay at the railway station. Its badly riddled body was viewed by hundreds; many photographs were taken and all southern papers gave it widespread publicity. Mr. Lindemann said that many cuttings from southern papers made interesting reading; but they were all destroyed in a fire at Lowood some years ago. Lowood's "bunyip" was the most talked of thing for some time. If Lowood had not been on the map before, it certainly was then. Mr. C.H.D. Lindemann still enjoys telling the story. He said after that he got the blame for everything that happened whether be knew anything about it or not.' (Queensland Times, 1 January 1940)


It is perhaps fortunate that the hoax was exposed so soon. As we have seen with other fantasy creatures such as Bigfoot and Nessie, a hoax that is left unexposed for too long becomes accepted as unshakable fact by paranormalists. Despite its acknowledged origins as a joke, the tale has been retold ever since and the 'Lowood Bunyip' has become an established part of the local culture. A replica bunyip played a prominent part in the Lowood State School's centenary celebrations in 1981, and they have recently adopted 'Horis the Bunyip' as their school mascot. A history of the tale on their website unfortunately fails to mention that it was a hoax. You can even visit the Lowood Bunyip Twilight Markets, who have their own bunyip logo in the form of Bruce the Bunyip. 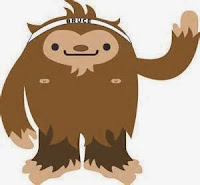 Carl HD Lindemann would no doubt be amazed at the longevity of his elaborate prank. It is a local fame, however, that is well deserved.