New plans for redeveloping the land to the side of the Boggo Road heritage prison have been made public fairly recently. The idea is to build retail and hospitality facilities between the prison and the Ecosciences building. The plans can be seen here, and basically look like this (pink): 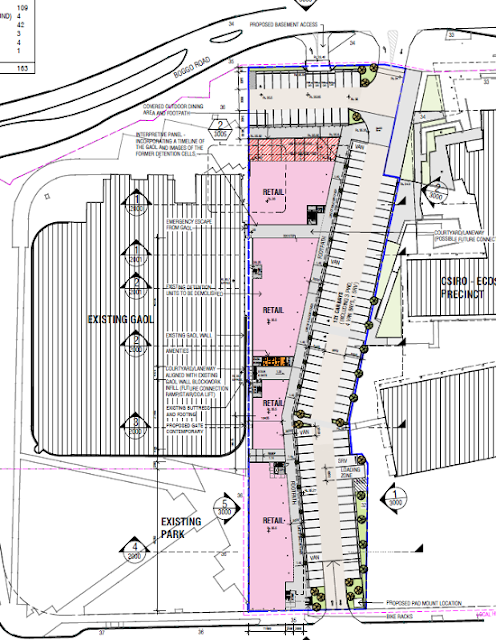 This would involve demolishing some structures on the eastern wall of the prison, namely the heritage-listed remnants of the No.1 Division (1970s), including a watchtower and Detention Unit (containing six punishment cells). This would be a loss as they are entirely unique structures within Queensland, and could be adaptively reused as interesting spots fairly easily.

However, I was prepared to accept structural changes in previous redevelopment proposals, and can accept this one too, albeit reluctantly. Having said that, those earlier proposals did involve rejuvenating the interior of the prison, while this one focusses on the exterior. I have been involved in over a hundred meetings about Boggo Road redevelopments since the early 2000s, and am now inclined to let things pass. I'm pretty tired. Something new needs to happen with Boggo Road. It cannot be left to stagnate forever.

My primary concerns actually relate to what will be happening INSIDE the heritage prison, which is currently underused and overpriced. I have long argued that Boggo Road needs to be transformed into a professionally-managed community/arts/education/tourism/heritage hub, a view shared by professional organisations I have worked with in developing a common vision.

Visitation needs to be of a higher level and better quality than is currently achieved by what is sadly marketed as little more than a ‘haunted house’ attraction. It could be so much better than having what is often just a handful of people attending a ‘ghost tour’ on weekend nights, or tiny history tours during weekdays. And it should go without saying that more patrons in a thriving heritage/arts centre would be of more benefit to the retail and hospitality businesses leasing space in the new development.

The state government still seems to be undecided on the subject of what will happen inside the prison which is an unfortunate position to have after about 20 years thinking about it. I would say that what is needed is more government investment, an approach taken by other state governments in developing such world-class heritage prison sites as Port Arthur, Fremantle Prison and Old Melbourne Gaol. Boggo Road needs real government backing in order to become as good as those places.

Anyway, those are my thoughts on the project.

UPDATE: I've just seen a news article on this subject. The tour company manager at Boggo Road supports the demolition of the detention unit and other structures because they're overgrown and decayed anyway. Where the hell has he been for the last six years? Standing by letting that happen, not speaking up and protecting the place or drawing public attention to it? Too busy inventing ghosts to bother with the prison itself, obviously.

(I am the secretary of the Boggo Road Gaol Historical Society, but my comments do not necessarily reflect the position of that group on this matter.)