'To Preserve and to Protect: Policing Colonial Brisbane' - Book Review 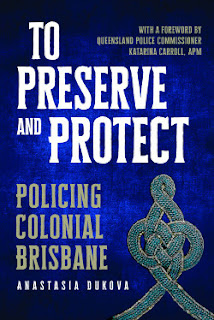 Anastasia Dukova’s To Preserve and Protect: Policing Colonial Brisbane is a very readable look at law and order in 19th-century Queensland.
This is no straightforward ‘history of the police’ reference book because the story is told from several different perspectives, an approach which gives the reader a much broader view of colonial life.
Outside the Indigenous presence, colonial Queensland was a migrant society, and Dukova’s background (she holds a PhD in crime and policing history from the University of Dublin, Trinity College) means she is tuned into the direct personal and cultural connections between the streets of Dublin, London, and early Brisbane.
This opening chapter is about Peter ‘Duff’ Murphy, an Irish ex-convict who in 1846 became the first district policeman for Kangaroo Point, and in the 1860s presided over the local police court in Ipswich. The story neatly covers convict life and the struggles of early policing, and the frequent overlap between the two. It is also a tidy example of one of those personal colonial journeys from criminality to social respectability.
Then we get to see policing develop further in the township with Englishman Samuel Sneyd, who had a much more orthodox career in the ranks of the military, police, and prison service. The Sneyd family ended up having a long association with the prison service and I’m pretty familiar with that side of their lives, so I particularly appreciated seeing their earlier story fleshed out more here.
There are chapters on the life of Queensland’s first detective (Samuel Lloyd), and the career of an ordinary beat policeman (Thomas Tyrell) during the 1860s-‘80s, highlighting the different paths to be taken within the police service itself.
19th-century female criminality (a subject I have researched and written about in the past) is viewed through the life of Susan McGowan, an all-too-typical tale of a life filled with petty crime and alcohol that was the lot of the vast majority of female prisoners of the late 19th century. The we jump to the birth of the Criminal Investigation Branch in the 1890s is with the story of detective and police prosecutor James Nethercote.
Finally there is the story of Charles Durant, an habitual criminal who spent a big part of his life in places such as the St Helena Island penal establishment and the prisons at Petrie Terrace and Boggo Road.
These perspectives work well together, allowing the author to humanise the people involved while also touching on the subjects of police and political corruption and mismanagement, and issues of gender, class, and - to a lesser extent - race. To Preserve and Protect was released during the height of the Black Lives Matter protests, when the public mind was more attuned to such history, which left me thinking that a full chapter on colonial police interactions with Aboriginal people would perhaps have been welcome. But that’s hindsight.
This mix of very different ‘characters’ paints a vivid panorama of law and order in 19th-century Queensland. The shifting perspectives keeps the book readable and interesting, and the thorough academic research and deep dives into primary documents gives the information an important sense of reliability.
To Preserve and Protect: Policing Colonial Brisbane has been published by the University of Queensland Press. Thanks to UQP for providing the review copy.
No comments:

A Flood of Lies

A 'Ghost Tour' is not a 'History Tour'. No matter what the marketing spin and branding, they are not History. At least, the ones we have in Brisbane aren't.
I get that ghost tours have a historical 'feel' and can potentially be used to successfully convey an understanding of historical events to the customers, but what happens if the events described in the tour are embellished with fabricated details, or - even worse - they never happened at all? Then it's not History... it's fiction.
I will use one example of fake history to make my point. This is told on a ghost tour at the South Brisbane Cemetery. The rest of the tour is full of serious problems regarding accuracy (to put it politely), but this one is perhaps the most egregious and harmful.
The tour story in question involves the Brisbane River floods of 1893. Paying customers are told that that those floods ripped through the cemetery and washed out graves, including coffins and bodies. Multiple body parts were later found scattered, but it was too hard to identify which grave (or body) each belonged to and so they were placed together in coffins and reburied.
The real history is rather different. The primary records show that the steamer Midge passed the cemetery on 7 February 1893 and a passenger reported that ‘in the lower part of the South Brisbane cemetery many tombstones had fallen altogether or out of plumb.’ This was to be expected as debris in the swiftly-moving waters knocked into monuments. On another trip shortly afterwards it was claimed that, ‘On the South Brisbane side a landslip has occurred, and undoubtedly some graves have disappeared, and gravestones are strewn all about.’(1) The part about the graves 'disappearing' was just speculation, but it prompted cemetery trustee Joseph Baynes to visit the cemetery the very next day to assess the damage for himself.
He noted that, ‘On examination I find that no graves have disappeared, but many headstones and other fixings are very much damaged, and persons interested would do well to look after them.’(2)
It is important to remember that the cemetery had only been open for 23 years at this time. It was still new and most of the relatives of those interred in there were still alive. Not only would they have noticed if something was askew (such as grandma not being in her grave any more), it would have been a big story in the newspapers of the day. Baynes would have been immediately found out if what he said was not true.
The floods story also has a typical ghost tours addition, this one involving the body of executed murderer Francis Horrocks, was buried in section 6B (used exclusively for such criminals) in 1892. According to the ghost-tour guide, his body was secretly moved by his (respectable) family to their grave plot in section 11B. There is absolutely no evidence that this move occurred, and the records show Francis' remains are still in 6B. What actually took place was that the prison authorities handed his body over to his parents after his hanging, so they could oversee the funeral themselves, but he was nevertheless still interred inside section 6B. The tour guide then claims that his body was washed out of the ground in the flood of 1893, with allusions of divine retribution (again, never happened).
But there's more distasteful nonsense here. Customers are informed that the fishing is good in the river because substance from the human remains in the ground leaks into the river (somehow) and the fish feed on it. Again, there is no historical or scientific evidence to back this up.
So the tour story is, in the absence of actual evidence, basically fictional, like one of those (very loosely) 'based on a true story' movies. Yet it has real-world ramifications because unsuspecting people believe it. My colleague Tracey Olivieri has met people who have found their ancestor's graves near the river and, because it was unmarked, thought this might have happened to them. They were in tears over it. Until they were told the truth. We also see - far too many times - people writing online that 'graves were washed away in the flood'.
As the current political climate shows, facts matter. We might disagree on interpretations of meaning in history, but it is important that we have a shared reality. The flood of 1893 did happen, but there is zero evidence to suggest that it washed bodies out of the South Brisbane Cemetery. And evidence is a cornerstone of the practice of history. As we skeptics say, 'extraordinary claims require extraordinary evidence'. As a professional historian, I could never make claims such as these without proof. 'Old timers say' just doesn't cut it.
This is not History, and if there is any place that should have its history treated with some respect, it is a cemetery. Its primary significance lies in its important spiritual and familial values, a keeping-place of love and memory. These stories make a mockery of that.
Personally, I'd argue that the Brisbane City Council's 'duty of care' for a place that they still market as a place of interment should extend to ensuring that tour operators can't just make stuff up to sell as History there.
Of course, if the scriptwriter can provide any hard evidence to show I'm mistaken, I'd be happy to acknowledge that. And if the tour operator cannot do so, then in my opinion they should not be allowed anywhere near a cemetery.
__________________________
(1) Brisbane Courier, 8 February 1893; Brisbane Courier, 23 February 1893.
(2) Brisbane Courier, 24 February 1893.

Despite the name, we in the Friends of South Brisbane Cemetery have a long history of engaging with other cemeteries around Queensland. After all, once you know how to 'read' old cemeteries and understand the shared framework of their histories, they are all interesting. We can't even drive past an old cemetery without having to pull over and investigate it, working out the local population demographics, excitedly noting new symbols or original monument designs we haven't seen before, identifying local stonemasons, etc. Once you've got the bug...


Apart from our very extensive work within South Brisbane, our not-for-profit activities in other Queensland cemeteries over the years include:

As you can see, our cross-cemetery credentials are very broad and well established. We have also been a leading advocate of the 2015 Brisbane City Council decision to encourage the public to better 'engage' with municipal cemeteries (which are classed as ‘parks’ under council laws), and a lot of the above work has supported that aim. Most cemeteries in Brisbane have no Real History tours (i.e., featuring nothing but factual historical information), and we have filled the void where we can and introduced thousands of people to the quiet joys of their local burial grounds. Being not-for-profit, the tours have also raised valuable funds for a number of upcoming cemetery history projects which will emerge over the next 12 months or so.

I guess the point of all this is to say that - as a professional historian myself - I would encourage other historians and volunteer history groups wherever they may be to utilise these resources to share their research and stories of our city, increase public appreciation of these special places, and generate funds for their own history projects. After all, Brisbane's municipal cemeteries have a shared history and are funded by and belong to the people all around Brisbane.