A Part of Her 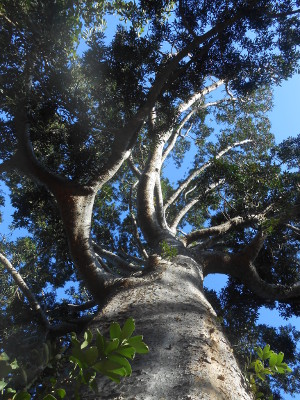 In the low-lying centre of the South Brisbane Cemetery, a young but magnificent kauri pine grew to the side of a concrete-topped grave, lifting that top up unbroken but at an ever-worsening angle. This is the grave of a girl who died in 1945 at the age of just 14 months. Little more than a baby. The niece and great-niece of this girl recently contacted the Brisbane City Council and asked them to fix the grave. The council had, after all, allowed this tree to grow there. The solution was to completely remove the concrete top and move the plinth and ledger to the other end of the grave, away from the powerful roots (a small statue formerly on top of the plinth has long since gone).
The tree remained in place. It is a beautiful tree, I said to the great-niece. Yes, she said, 'It is as much a part of her as she is of it', perfectly putting into words my own way of seeing the graves and the cemetery. The remains within them transform over time and gradually become part of their surrounds, the soil, grass and the trees of the cemetery. There was something of that little girl in that great tree.
A similar sentiment is expressed in the brilliant Walt Whitman poem 'Song of Myself', written during the second half the 19th century. Section 6 of this poem is known as 'A Child Said, What Is The Grass?', in which he tries to answer the question in various ways, going on to call it the 'beautiful uncut hair of graves'.

'And the hints about old men and mothers, and the offspring taken soon out of their laps.
What do you think has become of the young and old men?
And what do you think has become of the women and children?
They are alive and well somewhere,
The smallest sprout shows there is really no death,
And if ever there was it led forward life, and does not wait at the end to arrest it,
And ceas'd the moment life appear'd.
All goes onward and outward, nothing collapses,
And to die is different from what any one supposed, and luckier.'

Whitman saw life as being in constant flux, with the emerging blades of grass indicating that death is not permanent because it leads to new forms of life. He says in these verses that he will use the grass 'tenderly', because it might have grown from the breasts of young men he loved, or from the remains of old people, or women, or children taken too soon.
And so it is with many of the trees of the cemetery. 'It is as much a part of her as she is of it'.