You Only Die Twice: Fading Memory in a Cemetery

"Our dead are never dead to us, until we have forgotten them." (George Eliot)

In recent months I happened, quite by chance on my way to the staff room in the back half of a crematorium, to see a coffin on a table in the last moments before its contents entered the furnace. Not too long afterwards I sat outside on a lunch break and was pushed into thought about life and death as I watched smoke emerge from the furnace chimney. One minute ago there was a human body, and now it was transformed to fragments, ashes and smoke. Something different, not human any more, after all those years walking the Earth. It felt like a deep moment. I continued eating my sandwich.
A week or so later I was walking through South Brisbane Cemetery when I saw a departing grave excavator, which had just finished filling in a new grave, a rare enough sight in that cemetery. With nobody else around, I walked over and sat by the fresh mound of soil for a short time. There is a strange atmosphere around new graves in quiet cemeteries, like the sadness of the mourners has lingered after their departure. I couldn't help thinking the same thing as when I had seen the crematorium smoke - 'is that it?' Last week this was a breathing person. Now they are in the ground, the dirt has been topped, and we'll never ever see them again.
The last physical remains of these people had finally left this world, and the job of remembering them had now begun. A stone or a plaque would be erected sometime with their name on it, there would be flowers, there would be visitors, for some time at least. Over the years, on birthdays, fathers or mothers days, Christmases and other special days, visitors might continue to come and remember. The marker would begin to require upkeep in the face of the elements and time. But the deceased would be remembered. This is why we have cemeteries.
And then one day, maybe decades later, nobody would visit any more. The marker, if it was still there, would probably be the last public indication that this person had ever existed. And once untended, it would decay, particle by particle. And maybe the slow death of a memorial stone is like the second death of the person or people it commemorated.
I'd had this feeling before, when researching monuments in the South Brisbane Cemetery. I found a 19th-century sandstone marker that had gradually worn over time so that the original inscription was now completely gone. It was now just a blank stone. For a stranger, it would require a trained knowledge of the graves and access to detailed plans to work out who was in the grave below.
There are a few more markers like this in the cemetery. A slate ledger with only a few scattered inscribed letters still visible, the last remnants of the name of sad mother of fallen soldiers. A concrete headstone with no trace of a single letter of the name of the broken woman who had drowned herself in the river over a century ago. An 1860s sandstone marker brought over from the old Paddington Cemetery, with much of the wording now hidden beneath lichen but the crumbling surface too fragile to be safely cleaned.
Another strange moment was seeing an old photograph chamber built into a South Brisbane headstone. Peering up close, I realised there was a face behind the glass looking back at me, mostly faded but still just there, as if it was staring distantly out from another time and place. Not unlike one of those fake faces in a 19th century 'ghost' photograph. It seemed to be slipping away from this world. You knew that in a few years you wouldn't be able to make out the eyes, the nose, the mouth or the hair any more. The paper would slowly, incrementally, fade and crumble away to nothing. 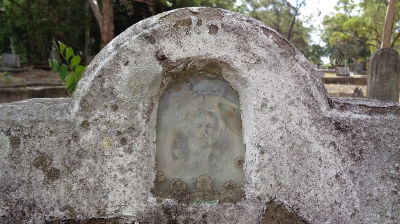 This is the face of 43-year-old Thomas Blatchford Leigh, who was employed as a drayman at Victoria Park in July 1930 under the Brisbane City Council's unemployment relief scheme, working in return for basic welfare during the Great Depression. He had been employed for about one week, with his wife and family still in Innisfail. His job was to move loads of earth from construction works for a new road. During the morning he complained that he had strained himself and appeared to be seriously ill, but he continued to work on anyway. Later he told the foreman of a pain in the region of his heart. Still he worked on. As he was about to take his last load for the day, at around 4.30 pm, Thomas suffered a heart attack. His workmates noticed his horse and dray wandering slowly off the new road, and on closer inspection they found his dead body inside it, lying on top of a load of earth.
This was the sad, needless death of an impoverished man. And here was his face, the last recognisable feature of a decaying photograph, saying a long, slow goodbye to the world.
This thought gives extra impetus to the work of cemetery volunteers in cleaning and extending the life of a grave, or just photographing it as it is now, creating a new record for the future. One day that stone will not be there any more. For some of those laid to rest in the cemetery, this will be a second death of their memory, and a final forgetting of their existence. Sad thoughts maybe, but sometimes that's what you get hanging around old cemeteries. That, and an improved appreciation for being alive.