Here's one about an alleged ‘history’ tour telling people not to trust historians.
For some reason, ‘Ghost Tours’ guides are still telling paying tour customers that there used to be a morgue in the South Brisbane Cemetery. The truth is that there never was a morgue there, a fact that was comprehensively proven in this article by Liam Baker ten years ago. Yet they persist with this false claim.
I recently heard feedback from one of their customers, who was told during a tour last month that a former gravedigger claims that there was a morgue in the cemetery. The guide also said (and this is in the customer’s own words) that ‘some historians dispute this fact because they can’t find evidence’, and ‘who would you believe - a historian or the word of an actual gravedigger who worked here’.
Okay. There’s a few basic points to pick apart here.
Firstly, there is no indication in any of the official records (plans, annual reports, minutes, etc.) that there was ever a morgue in the South Brisbane Cemetery. On the other hand, there is plenty on record about the other real morgues in Brisbane. That is because they actually existed, unlike the alleged cemetery morgue. Historians cannot ‘find’ evidence that simply does not exist.
The evidence we do find, however, shows that the red-brick buildings in the cemetery were built in the 1950s as staff amenities blocks, as is clearly shown in council minutes and this official plan: 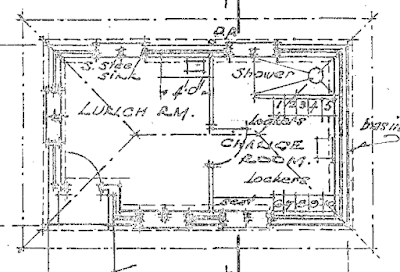 Simple fact: This brick building was never, ever used as a morgue.
As for claims that any pre-1950s timber structures in the cemetery had been used as a morgue, once again there is simply no evidence for this beyond ‘old timers say’, which just doesn’t cut the mustard with serious historians. Liam Baker's article deals with this subject in detail.
Secondly, while oral history does have its place, it can be notoriously unreliable when dealing with historical events outside the direct experience of the interviewee. I unearthed a classic example with a former prison officer who had worked at Boggo Road in the 1970s and was telling tour groups that the notorious prisoner Slim Halliday had once escaped from the prison in 1940 by jumping off the roof of a three-storey cellblock and landing on the top of a thin 7-metre-high perimeter wall. This would be a superhuman feat more worthy of Spiderman, and a check in the archive prison records quickly showed it was complete nonsense. I wrote about ‘The Myth of Halliday’s Leap’ here. It wasn't that the officer was lying about it, this was just what he had been told by other officers. It was all before their time.
Also, if this really is the 'word of an actual gravedigger', and this is the only evidence for the story, then it is good practice to provide names, dates, and maybe direct quotes from the oral history transcript.
Of course, if there is an oral history transcript of a former gravedigger claiming there was a morgue - but then all the official evidence shows they were wrong - then whoever wrote the ghost tour script clearly lacks the basic historical research skills needed to correct the story.*
Either way, it is unacceptable for something to be passed off as a ‘history’ tour while undermining historians. As a historian and a member of the Friends of South Brisbane Cemetery, I can say this is just another example of an ongoing problem with the content of the Ghost Tours in the cemetery. I've written about this before, and it really would be good if Brisbane City Council (who license these tours) took steps to set some standards. The truth is that many people implicitly believe what they are told on tours, and too much of what they are being told is simply not true.
If Ghost Tours want to defend and continue telling these stories without pushback, then let them put their evidence on the table and prove me wrong.
*It is important to remember that the tour guides are just paid to read a script and are not responsible for content.