The Brisbane Floods and a 50-Year-Old Lost Headstone Mystery

The Brisbane flooding of 2022 might not have had a good effect on the South Brisbane Cemetery when it inundated the office and storage shed there, but it led to a surprising sequence of events that resulted in the rescue of several previously lost headstones that turned up about 20 km away.
It started when the waters of Albany Creek, on the Brisbane/Moreton Bay council border, swelled up and washed away topsoil on the creek bank next to a private housing development. Some of the residents there were inspecting the area in the aftermath of the deluge and were stunned to find parts of headstones forming a semi-collapsed retaining wall on the bank. These had previously been hidden by the topsoil, but here they were, marble and granite pieces with names and dates that were unmistakably from a cemetery.
Below: The scene of the lost headstones. 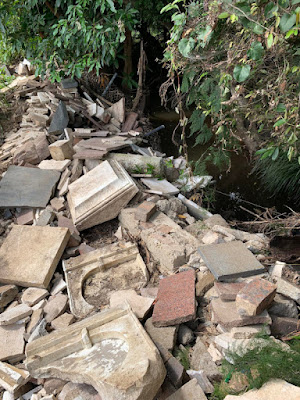 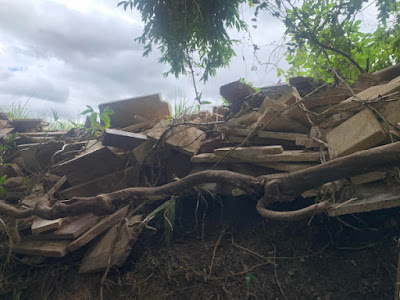 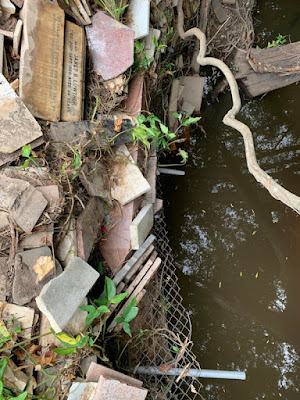 A nifty bit of detective work by one of the residents (Dan) sourced one of the stones as being from the South Brisbane Cemetery, so they called the Friends of South Brisbane Cemetery. Photos of the site were forwarded, and frankly we in the FOSBC were stunned. These were stones that had been removed from municipal cemeteries during the controversial 'Beautification Scheme' of the 1970s. In brief, this scheme involved the Brisbane City Council of the day deciding to tidy up the old cemeteries such as Balmoral, Toowong, Lutwyche and South Brisbane that were now mostly closed to new burials (but still requiring costly ongoing maintenance) by clearing out old monuments they deemed to be 'dangerous or unsightly' (after first seeking permission of the grave owners). The aim was to create more open park-like space. This would seem unthinkable now, but attitudes to heritage were different back then and there was little public opposition to all this. An estimated 1,000 graves were affected by this scheme.
Some of the removed stones were buried in pits either inside or next to the cemeteries, but it has always been something of a mystery where the rest of them ended up. The Albany Creek flooding had just solved one small part of that mystery. There is a long, low wall along the top part of the bank, and for some reason one small section was built up using the old cemetery stones.
But what to do next?
Resisting the urge to go for easy clickbait news coverage, the FOSBC kept things quiet and liaised with the Albany Creek residents to go and retrieve what we could before word spread and any pilfering occurred. We could see from the names on the headstones in the photos that the majority of them were from Toowong Cemetery, but we love all cemetery history and even run a monthly night tour over at Toowong, so this is a fascinating bit of Brisbane history that we were determined to protect.
We rounded up a band of volunteers and on Saturday 19 March headed north with utes, cars and trucks to see what we could save. There were close to 20 people involved throughout the morning, with several other FOSBC members generously donating hundreds of dollars to cover fuel expenses (some of us drove from as far away as Ipswich).
With the assistance of some of the local residents we sifted through the stones, collecting marble and granite pieces and loading up our vehicles. Some serious heavy lifting was involved, resulting in a lot of tired arms and legs by days end. The locals even put on a delicious BBQ for us afterwards - thanks so much to Dan and Tracey for that!
Below: The FOSBC volunteers get to work. 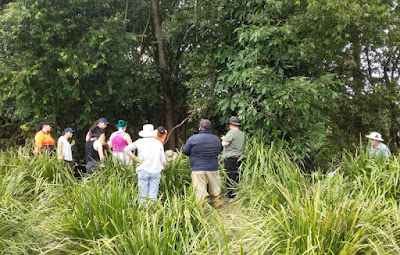 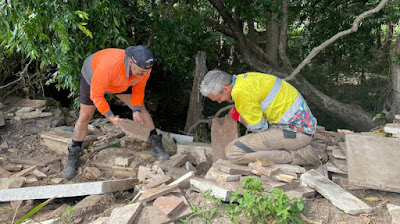 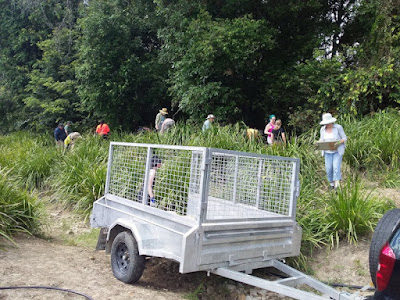 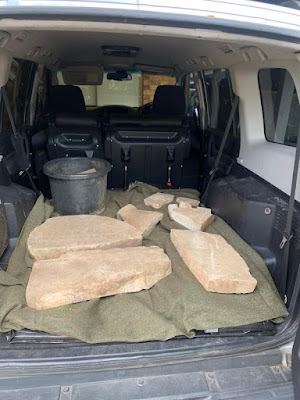 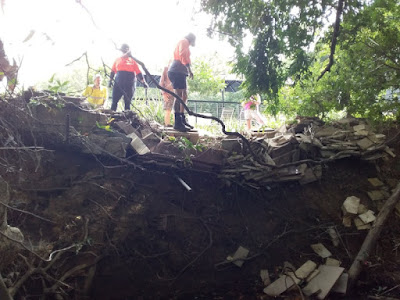 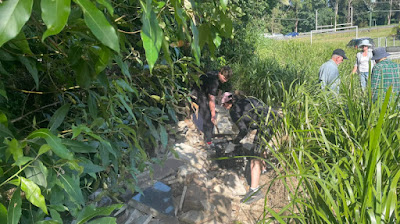 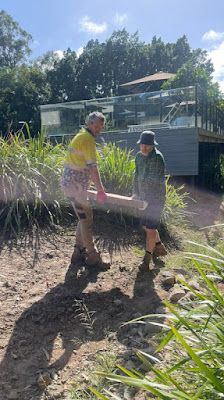 We then headed back to South Brisbane where even more volunteers were waiting to help us unload and deposit the stones there. Now we are awaiting the next move from Brisbane City Council, who have since inspected the Albany Creek site and are looking to move a few remaining pieces that were too big for us to handle. There might even be a few more pieces deeper underground. After that, we hope to see the stones returned to their original grave locations at South Brisbane and Toowong. For now, however, the important thing is that the process has started.
Below: Unloading back at South Brisbane. 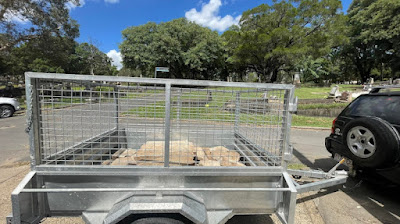 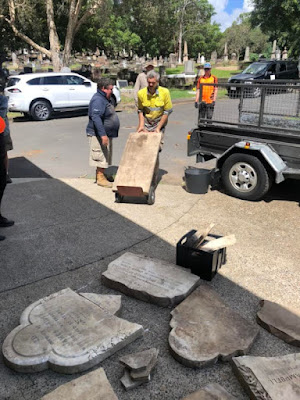 All in all, it was a hugely educational experience for the FOSBC volunteers about the reality of the Beautification Scheme and past attitudes to our heritage. It was also something of a surprise to current BCC staff (who, after all, had nothing to do with what happened nearly 50 years ago).
The whole incident was a great example of the power of a strong community group like the FOSBC, as we were able to get enough boots on the ground and the finances to pull this rescue off. The dedication of these people and their willingness to roll up their sleeves and get stuck into heavy work like this is an inspiration.
A particular thanks must go to Dan from Albany Creek, who cared enough to find out where the stones were from, get in touch with us, and help organise the effort to move them.