It has been a couple of months since I wrote about the decisions by the Ipswich City Council and the Goodna Cemetery Trust to allow commercial ghost hunting in the cemeteries they manage. They are the only cemetery authorities in the world to allow this (as far as I know). These hunts are banned in Brisbane cemeteries. 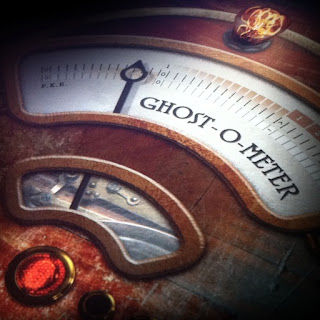 So what has happened since then? The controversy was featured in an ABC news story and also in one on Channel 7. The petition against the ghost hunts is still picking up signatures. The event organiser is insisting the ghost hunts are fine. The 'ghost hunters' group claim to have changed the way they operate. The Ipswich City Council have been circumspect and the Goodna Cemetery Trust have been silent. It became obvious that a lot of people don't know the difference between a ghost hunt and a ghost tour, and that a lot of ghost hunters think historians (especially me) are 'boring' and 'no fun'. The majority verdict (outside the ghost hunting bubble) is that these hunts are wrong. Yet the cemetery ghost hunts are still being permitted. So far.
YOU CAN SIGN THE PETITION HERE

When news reporters started chasing the story, the 'ghost hunters' group (Pariah Paranormal) refused to speak to the media, and then went about deleting evidence (text and images) of some of their Goodna Cemetery activities from social media. That evidence had already been shared elsewhere, however, so it was too late. Having been exposed, they then claimed that they no longer did some of those activities (such as spirit communication boards and ghost-o-meters on graves), saying 'we have learned'. We shall see, but this all came across as PR damage control after the fact.

Mr Sim also thinks that anyone opposed to a business charging customers to play-act ghost hunting on other people's graves is... 'precious'. That would include Brisbane City Council, the majority of the public, and... himself. Back in 2014 he publicly described paranormal investigations in cemeteries as being:

When asked by the ABC about Pariah Paranormal's more intrusive ghost-hunting practices at Goodna Cemetery, Mr Sim claimed that he was 'unaware of that activity and would consider it disrespectful'. He said this despite those activities occurring at events being run in conjunction with his own business, such as this one back in April.

Mr Sim also claimed that running commercial ghost hunts would deter would-be ghost hunters from entering cemeteries by themselves. It is much more likely that advertising to the world that it is okay to play ghost-hunting in cemeteries will just lead to more people trying to sneak in and do that.

As it was, the ghost hunt went ahead, on unmarked graves in the cemetery. It is very unlikely that the organisers even knew who was in those graves. It could have been anyone.

Despite the interest in this matter from the public and the media, no councillors have spoken about it publicly, and Goodna Cemetery Trust have also been dead silent on the issue.

I emailed the ICC, but in their reply received no answer to the following questions:*

I also asked if the ICC could provide a rationale for the decision to allow ‘ghost hunts’ in one of their cemeteries. None was forthcoming.

At no point has anyone in the Ipswich City Council addressed the simple question of whether or not they think it is appropriate for a business to charge customers to 'ghost hunt' on other people's graves.

I assume that the ICC have received multiple complaints from families of the deceased about ghost hunting being allowed in the cemetery. Sadly, the overall response from those involved in this controversy has been to ignore or deflect from the simple core issue that:

Someone in council saw this ghost hunt proposal and thought, 'yes, that's okay', and signed off on it. That person has a name and a job title, and I'd really, really like to know who it was because I want to hear them try and justify that decision.

It's really not that hard to understand the problem here. Ghost hunting in cemeteries is wrong. These activities need to be stopped immediately. The fight goes on.

* The council officer who replied to me did not provide their name or position.